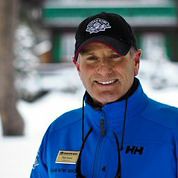 Rob Kautz, Sugar Bowl Resort president and CEO, has announced his retirement after nearly four decades at the resort’s helm, It is one of the longest careers in the history of the Tahoe ski industry,

Kautz will stay on as president and CEO until a new President is on board, and will continue to work at the resort through June 2016. He will also remain on Sugar Bowl Corporation’s board of directors.

The retirement announcement marks the end of a landmark career. Kautz, working closely with and supported by the resort’s ownership group and senior management team, spearheaded the expansion of the resort, modernizing its chairlift system and leading a revitalization of real estate at the nation’s only snowbound village.

Kautz is married to Kerry Kautz, a long-time student mentor at the Tahoe-Truckee Unified School District. He has a son, Ryan Kautz, a successful business owner, and Jessie Kautz, a graduate student and former college soccer player.

Kautz will serve on the board member committee tasked with leading a nationwide search for his replacement.