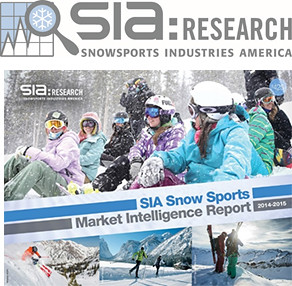 In the 37th annual update, the 2014 Snow Sports Market Intelligence Report explores the record-breaking $3.6B season that was filled with extraordinary weather patterns that included severe drought in the Sierras, polar vortex events that brought arctic cold as far south as Texas and truly excellent snow conditions in the Rocky Mountains.

“SIA data opened up some eyes at our company in regards to what sells, where it sells and for how much. One of the benefits of this report is seeing the big picture to help make the numbers relevant; it’s not just sales information that makes up the data, it’s inventories, snow cover, the economy, etc.,” said Kyre Malkemes, snowboard category manager at Mervin Manufacturing.

The 2014 report provides an easy-to-follow analysis also features stand-alone chapters for alpine, snowboard, cross country, telemark, backcountry-randonee/AT, snowshoe, equipment/apparel accessories and apparel categories. There is also an in-depth executive market summary provided with the Report that digs deeper into the 2013/2014 season.  “SIA and Leisure Trends Group stay on top of what is going on and make sure we have access to data that supports and addresses current issues so that as an industry we can make intelligent and informed decisions for our businesses,” said Tim Petrick, president of global sales and marketing, K2 Sports.

The 2014 SIA Snow Sports Market Intelligence Report is available at no cost to SIA Members and for $425 to non-members. Full reports on the women's and juniors-specific snow sports market will also be available this fall. Stay tuned.

To receive a copy of this year’s report or for more information about snow sports retail sales information and other SIA Research products including the Snow Sports Participation Study, Revisiting Growing the Snow Sports Industry and more, contact Kelly Davis, SIA's director of research, at KDavis@snowsports.org or by phone at 703-506-4224. Get the latest updates on from SIA research at Snowsports.org/research and by following #SIAdata on Facebook and Twitter.