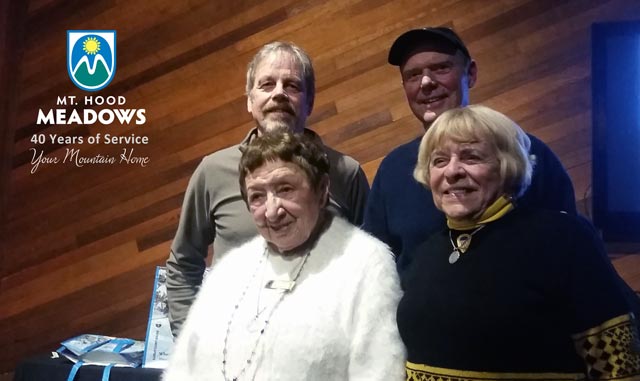 Mt. Hood Meadows staff gathered recently at the Oregon resort to honor four employees who have worked at Meadows for 40 or more seasons.

Meadows CEO Matthew Drake characterized the individuals as having a common passion for those who recreate and work at Meadows, a quest for learning and improvement and a sense of satisfaction and accomplishment for doing the best job possible.

Here are the honorees:

Jeanne Farwig came to Meadows in 1969 with her then husband Renee Farwig who was hired as Meadows Ski School Director. She began skiing at age 5 and was on the women’s ski team at the University of Colorado. She worked at Grand Targhee for a few seasons and returned to Meadows for good working every season since 1981. Jeanne coached Billy Johnson as a young boy who went on to be the first American to win a gold medal in downhill in the 1984 Olympics. She has been a certified ski instructor for over 50 years and at 83 continues to share her passion teaching lessons.

Kim Donaghy started working at Meadows in the rental shop in 1976. He has teched skis and snowboards his entire career, repairing damaged surfaces, tuning equipment and applying the perfect wax for the conditions of the day. Donaghy loves to ski and is known for enjoying the mountain in even the most extreme weather conditions. He has an extensive collection of ski equipment dating back over several decades.

Since starting in 1976, Steve Warila has been a snow cat operator, lift mechanic, night ops manager, lift ops manager, electrician, construction surveyor and mountain ops manager. He managed or was involved in the construction of every chairlift beyond the first three at the ski area as well as the south lodge expansion and construction of new facilities. Warila credits working with an amazing group of people who are passionate about the mountain and thanked his coworkers for making this his mountain home.

Aidee Farwig came to Meadows in 1968 with her husband and son on weekends. She stayed in the lodge and knitted while they skied and was recruited to work in exchange for tickets for her family. By the third week she was on the payroll, and has returned to Meadows every season since. She developed Meadows first auditing system for tickets and proudly balances her daily business “to the penny.” The Farwigs have a rich skiing and racing history. Her son Billy competed in the 1980 Olympic downhill and coached the U.S. Alpine Ski Team in the late 80s and early 90s. Aidee continues to work in auditing, balancing tickets and telling those she meets she’s doing, “Better than ever,” earning her official title as Meadows’ “Queen of the Mountain.”

The group was awarded gifts at a recognition event attended by more than 300 Meadows staff and family members.