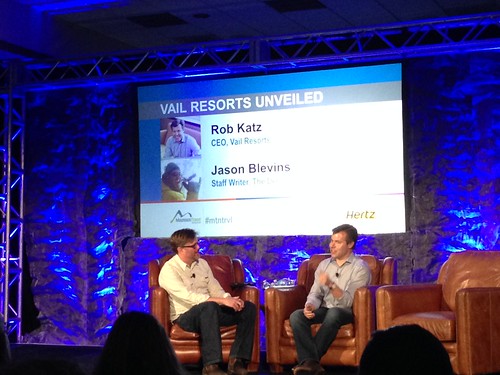 A wave of laughter swept over the audience of several hundred mountain travel professionals when Denver Post staff reporter Jason Blevins opened his interview with Vail CEO Rob Katz during a general session Sunday at the 39th annual Mountain Travel Symposium (MTS) with the comment “so you just got back from Park City?” More than 1,200 people are attending the week-long business-to-business event in Breckenridge, Colo.

The query was prompted by the contentious lease situation between Park City Mountain Resort and the Vail-operated Canyons Resort in Utah that is now headed to court. During the 45-minute interview, Katz discussed attending the most recent Park City Follies show that annually lampoons aspects of Park City life. This year’s production focused on the pending litigation with Katz portrayed as the primary villain.

“I laughed the whole way through but there were a couple of uncomfortable moments,” he confessed. Katz responded to other questions about the situation by explaining that there had been acrimony and strife surrounding the Park City lease before Vail Resorts entered the scene but emphasized that Vail wants to work cooperatively in the Park City area.

In response to the recent claims that Park City would start removing chairlifts if they lost the lawsuit, Katz said, “I think there is a lot of bluster that goes on but when it is done, I have every confidence people will do the right thing. Ultimately at the end of litigation, if it doesn’t go your way, then it is time to move on. Both companies need to move ahead and put the community front and center,” he concluded.

The Internet, a growing number of second homeowners and the recent recession have all combined to make home rentals by owners an increasingly popular lodging option for visitors staying for more than four nights.

In the session “For Rent By Owner: Tension, Taxes and Technology,” panelists described the challenges that have emerged when homeowners rent their property directly to vacationers, in many cases to avoid property management fees that can be as much as 50 percent of the rental rate.

The tension arises when these property owners are unaware of, or unwilling to pay the required local taxes. When out-of-town homeowners lack a local contact to handle their property, other issues such as trash removal, parking and “party houses,” become problematic for municipalities.

“All we’re trying to do is level the playing field,” explains Tim Gagen, Breckenridge’s Town Manager for his multi-year efforts to identify and educate these homeowners about the taxes. Six years ago when Gagen started trying to improve awareness of the tax requirements, he estimated that compliance in Breckenridge was around 50 percent but has now grown to around 80-90 percent.

Colorado has approximately 58,000 properties in rental areas according to Carl Shepherd, co-founder of HomeAway, a worldwide leader in the vacation rental home industry.

As costs rise, all the speakers emphasized the importance of innovation as the driving force of business. Technology will get increasingly sophisticated with items such as the Google Glass with a miniature computer screen display in the frame of a pair of eyeglasses delivering a constant stream of information enhanced by quality voice activation.

The $6.2 million purchase, development and funding of a ski resort in New Jersey located within 60 miles of 2.5 million kids is the innovative way that CEO and founder Schone Malliet and his National Sports Education Foundation has identified as the most effective way to get urban youth into winter sports.

According to Auden Schendler, Chairman of the Board for Protect our Winters, analyzing and reporting on the real costs incurred by businesses of all types as a result of climate change and electing new candidates to utility company boards are low cost but effective tactics being used to increase awareness and action by individuals and businesses to make a difference in climate change.

Kirsten Lynch, CMO of Vail Resorts asserted that challenging and questioning a company strategy or product requires courage for individuals to risk being wrong but is the key to unlocking innovation.