Still Plenty Of Turns As Season Extends Into May ... And Beyond

The vast majority of U.S. ski and snowboard resorts have shuttered operations for the season -- many of them extending past announced closing dates -- but a hearty dozen will spin their lifts deep into the spring.

Right from the git-go, the Pacific Northwest has gotten the lion's share on snowfall this season, and Oregon's nine mountains and resorts have opened with plenty of depth.

SnoCast: Active Pattern with Multiple Storms Ahead for the West

This week, snow activity really begins to pick up. As more and more ski areas open, we'll have multiple storms out West and fast movers in the East to build up the bases.

Oregon's ski and snowboard resorts have unveiled how they plan to deal with COVID-related concerns this winter, and the options are all over the lot -- depending upon seasonal variables and local habits.

With Valentine’s Day Friday and (hopefully) an extended holiday weekend for you, there’s a lot to love about the forecast!

We’re turning into mid-January with a busy and changeable weather pattern across North America. Two fast-moving (albeit mild) storms graze the East, while cold and snowy conditions persist for the West.

All On The Same Day: Bike And Ski At Timberline

Summer mountain biking mimics many of the motions, techniques, thrills, and spills of skiing and snowboarding during the winter. Now they can be enjoyed on the same day.

Where The Locals Go When Day Is Done

Most resorts have a bunch of bars to choose from when it comes to apres-ski, but if you want to find the down-home, braggin' rights kind of bar, just follow a local.

The first snow storms of the 2018-2019 season have coursed across the Pacific Northwest, and a number of resorts are gearing up for November openings.

Endless Winter: Where To Ski This Summer

If skiing and riding in the summer is on your bucket list, make it happen this year with options from California to the Southern Hemisphere to the European Alps.

Timberline To Open On Weekends

Ready to carve the first turns of the season at Timberline. (Timberline Lodge/Facebook)

The ski and snowboard season is officially underway as Timberline on the slopes of Mt. Baker will crank up a chairlift on weekends.

More powder to carve up at Bachelor with new chair lift. (Mount Bachelor/Facebook)

The new chairlift at Mount Bachelor will bring skiers and snowboarders into gladed steeps that previously required a long hike out.

The high-speed quad named Cloudcatcher opens up what is known as Low East – a below-treeline area of 635 acres on the volcano’s southeast side. The four-seat detachable lift will rise some 1,400 vertical feet and carry up to 2,400 an hour, and provide lift-access to some six miles of trails and assorted glades on that side of the mountain.

Cloudcatcher’s top terminal will be high enough so that folks can ski or ride over to the Rainbow or Sunrise Express – or get to the Summit Express loading area. It will also eliminate the 15-20 minute hike out of Low East.

Also this summer, crews shortened the Rainbow triple chair to keep its top terminal below treeline.

“The new lift and shorter Rainbow lift will alleviate capacity on the Sunrise Express and spread people over the mountain more quickly,” Mount Bachelor’s Stirling Cobb told SnoCountry.com, noting that a busy day at Bachelor can bring 8,000 skiers and riders onto the slopes. “The new lift also is protected more from the prevailing (northwest) winds that sometimes force us to close the northwest side of the mountain.”

Previously, the last lift to go up on the Oregon mountain was a replacement for the Pine Marten chair; before that, the Northwest Express debuted in 1996.

Elsewhere in Oregon, there will be new conveyor lifts at Mount Hood Meadows and Mount Hood Skibowl. At Timberline Lodge at Mount Hood, the second phase of an interior remodel is done in the Wy’East Day Lodge. 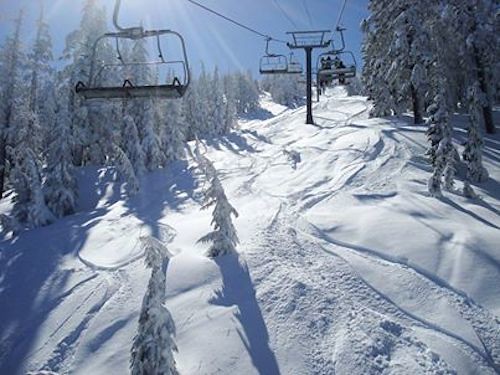 No need to hang ‘em up quite yet, but the list is indeed getting shorter. There’s skiing and riding in six states. Several resorts have stayed open continuously, while some others have closed during the week, but plan to re-open for the weekend. Here’s the rundown: Love is in the air at many Western ski resorts as guests celebrate Valentine’s Day. Here’s what some resorts are offering. The venerable Timberline Lodge received a late but great 75th birthday present with designation as one of America’s legendary hotels.

Love Is In The Mountains For Valentine’s Day/Weekend You just might fall in love with some of the deals awaiting you and your loved one in the mountains all across America. Here’s a sampling: Believe It: They’re Skiing All Summer At Timberline With a couple of months of off-season already in the books, there are those among us who just can’t get rid of the downhill itch. The solution is Timberline.