With opening dates on the horizon, crews at many resorts in the West have been testing snow guns -- and looking longingly to the skies -- in hopes of putting down a base of snow in October.

Most ski and snowboard resorts have announced their anticipated opening days, although persistent warm weather in some regions may have something to say about that. A frequent check of resort websites is recommended.

However, hints of winter whiff the air and the high-country leaves are turning, so it's time to haul skis and snowboards out of storage and get them ready for the season.

The informal race to be the first to open in the nation falls upon the highest-elevation mountains along the spine of the Colorado Rockies. Traditionally, it's been Arapahoe Basin, Keystone and Loveland that vie for the title, but Wolf Creek surreptitiously snuck in last season by firing up its chairlifts on Oct. 16.

This year -- if official dates are to be believed -- Keystone will lead the pack by opening on Oct. 21, followed by Arapahoe Basin on Oct. 22, and Loveland and Wolf Creek on Oct. 29.

In California, 7,700-foot-high Boreal on Donner Pass is optimistic to begin on Oct. 28, while Mammoth Mountain plans to be in second place with an Nov. 11 opening. Tahoe's Heavenly has penciled in Nov. 18 for its first chairs.

Despite having middle-of-the-pack summit elevation, Lookout Pass (5,650 feet) on the border of Idaho and Montana has pushed its first day all the way up to Nov. 6 -- a full two weeks ahead of its previous earliest opening. Schweitzer, Sun Valley and Tamarack all plan to follow later in the month.

A pair of Utah mountains -- Brian Head and Park City Mountain -- hope to be the first in the Beehive State with openings on Nov. 18.

Skiers and riders in Washington will have to wait until December for Stevens Pass (Dec. 2) and 49 Degrees North (Dec. 3), while Oregonians will have to bide their time until Mt. Hood Meadows and Timberline (Dec. 11). Mt. Bachelor expects to follow close behind on Dec. 12.

In New Mexico, Sipapu has had a lock on first-to-open in recent seasons. For 2022-2023, the family resort tucked into the Sangre de Cristos has tabbed Nov. 18 to begin spinning its lifts.

The Southwest Rockies' multi-mountain ski and snowboard season pass is on sale, as the Power Pass focuses on its seven winter resorts -- and a year-round mountain biking destination in Texas.

Power Pass 7-Pack All Spruced-Up For The Season

New trails, new lodging, and plenty of on-mountain upgrades mark the start of the 2021-22 ski and snowboard season for the seven resorts on the Power Pass.

Several New Mexico ski and snowboard resorts will delay openings, as the governor brought her state back to early-Covid restrictions this week by issuing a stay-at-home lockdown.

The first tier of pricing is out for next season's Power Pass, and the Southwest Rockies regional season ticket has enticements to buy early, a new limited-ticket pass, plus accommodations due to the uncertainty of the coronavirus.

Sufficient November snowfall and a steady diet of cold nights across the southern tier of the Rockies assured resorts in New Mexico and Arizona that they will open on time.

The world’s longest gondola and an expansion of terrain in the order of 2,000 percent highlight a multi-year proposal for what has been the smallest ski and snowboard mountain in Utah.

An ownership group focusing on the Southwest that has five ski and snowboard mountains under its wing now has a sixth: Elk Ridge Ski Area in Williams, Ariz. 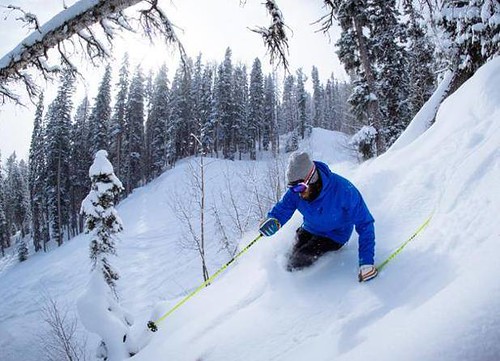 The four Southwest resorts under single ownership will continue to get upgrades this summer – with the first high-speed chair at Arizona Snowbowl headlining the projects.