Each year ESPN Magazine publishes its Body issue that features athletes posing nude as athletic and taseful human bodies and this year one of the models will be Jessie Diggins, the Olympic gold medal cross country skier at the 2018 Winter Olympics.

During the past couple of decades, a majority American ski and snowboard resorts have come to embrace that climate change is a reality – and a threat to their futures.

Evidence of resorts engaging the principles and practices that reduce fossil fuel use and carbon footprint can be found at many venues and in many ways. Low-energy snowmaking is spreading, as is on-mountain recycling, car pooling priority parking and biofuel use.

Here’s SnoCountry’s sampling of some of the green projects at U.S. resorts:

Sugarloaf. The northern Maine resort has gone all in to reduce its footprint, including revegetation to reduce erosion and composting at area restaurants that produces “black gold” soil used on the Sugarloaf Golf Course.

Cranmore. New Hampshire resort added its first electric/diesel groomer snowcat to supplement a fleet that has been burning biodiesel for a decade. New condo project will heat and cool with efficient electric pump systems.

Stevens Pass. All the lift cables at the Washington mountain are lubricated by non-petroleum castor oil, and management actively seeks out “green” vendors for its food and beverage services. Snowmobiles burn low-sulfur diesel, and operate as much as possible during off-hours.

Squaw Valley. Can’t buy bottled water at the California resort; instead, you can fill up water bottles at refill stations for free.

Aspen-Snowmass. The Colorado resort complex chose a political route in addition to e-efforts. Partnering with Protect Our Winters, all employees wear the organization’s patch, and resort officials lobby hard for local, regional and national climate change awareness and action.

The National Ski Areas Association lists 200 U.S. resorts that have signed on to its Sustainable Slopes program – and more than a dozen have received money for “green” projects through the program. 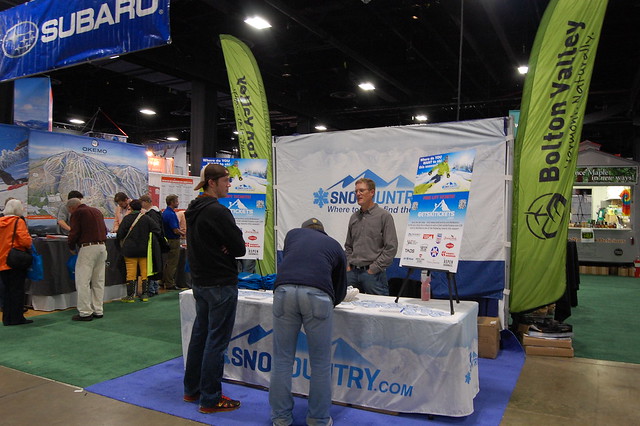 The party starts now at the Boston.com Ski & Snowboard Expo. It’s the place to be if you love winter in the Northeast and are ready to celebrate all the fun we are going to have on the slopes this year.