Park City Mountain regulars and visitors will have to wait at least another season before riding replacement chairlifts that were designed to reduce crowding at the base and on the mountain.

Therefore, skier and riders at one of America's largest ski areas will have to be content with the workhorse Eagle chair that is one of the main ways to get onto the mountain from the base area, and the Silverlode Express which loads at the crossover junction between Park City side and The Canyons side.

On June 25, the Park City Planning Commission agreed to allow an appeal by a quartet of Park City residents that installation of the two chairs didn't align with the resort's 1998 master plan. In addition, the commission said that resort ownership needs to update its parking plans around the busy base area to align with current carrying capacity estimates.

In essence, the appeal halts any plans for replacement lifts this summer at the 7,300-acre ski and snowboard resort. And, the appeal puts more pressure on owners Vail Resorts to sort out vehicle parking options that have been a sore spot for years, and further exacerbated by a Provo company's plans to cover one primary parking lot with commercial development.

Before plans were waylaid by the appeal, the 30-year-old fixed-grip triple Eagle was to replaced by a six-pack detachable chair to double uphill capacity and cut riding time to get to the Thanes Canyon area. Plan also called for the six-pack high-speed Silverlode Express to become the resort's first eight-person chairlift. Uphill capacity would nearly double to get skiers and riders out of what has become the busy Miner's Camp mid-mountain junction where people either stay on the Park City side or take a gondola to The Canyons side of the resort.

Vail Resort's officials opposed the appeal but have said that construction of the two replacement chairlifts is on hold, at least for this summer's construction season.

Vail-Owned Resorts In West To Get Major Lift Upgrades

Having paused lift construction in the 2020-2021 season, Vail Resorts unleashed its financial wherewithal to make it easier to move around a half-dozen of the 19 of its ski and snowboard mountains in the Rockies and the Sierra.

A steep slope off the ridge above The Canyons side of Park City Mountain Resort that has killed three in recent years will be open this season only to skiers and riders who want to make the hike.

Chelsea Clapham and her family began snowboarding at Mammoth Mountain four years ago. They enjoyed it so much that they return to the resort year-round. “We like summer and fall up there almost as much as winter,” said Clapham, who lives in Santa Clarita with her husband, Shaun, and two kids. “We have family friends who let us use their condo, so we’re hooked.”

The stairway to heaven may actually be a bootpack.

Top Resorts In West for Families

What do families want out of a resort? Parking near slopes, ski-in ski-out lodging, efficient signup for lessons, plenty of wide, moderate trails for the whole family, and lots of entertainment.

The nation’s first all-in-one action sports and ski resort is set to debut its ramps, tracks, pits and parks for this ski and snowboard season near Park City.

Both the Epic Pass and Ikon Pass streamline skiing and riding costs during the winter. Now that summer's here, they switch gears to make warm-weather times in the mountains more affordable, too.

U.S. Ski And Snowboard Hall Of Fame Inducts Class Of 2018

Olympians Bode Miller and Andrew Weibrecht were among the star-studded group of eight noted skiing and snowboarding pioneers, athletes and sport builders inducted into the U.S. Ski and Snowboard Hall of Fame at an April 6, 2019, ceremony in Park City.

Friday January 11, 2019 was the snow sports industry’s first National Learn to Ski or Snowboard Day at resorts throughout the U.S. Many resorts offered special deals for newcomers to take beginner lessons from professional instructors as a way to celebrate the sports.

Some of the prime powder steeps on Park City Mountain will be closed until further notice because a private landowner and Vail Resorts have not reached a new lease agreement.

More mobility around the base of Alta, an on-mountain learning center at Park City Mountain, and lodge renovations at Snowbasin highlight the first-to-open resorts in Utah.

With Epic Pass In Hand, Hit The Road (And Airports)

Here’s a sample road trip for those who have purchased an Epic Pass, have a week or two on the loose, and are ready to ski and ride across the West without having to shell out for a day ticket.

The IOC has announced that seven new winter sports will be incorporated into the 2022 Olympic Winter Games in Beijing, China. Four of these sports are International Ski Federation (FIS) events that will be on show at the 2019 Snowboard, Freestyle and Freeski World Championships taking place in Utah in February 2019.

The Biggest SnoCountry News Of 2017

Skiers and riders love to talk about the weather, and where to find the perfect storm of great snow and value tops the SnoCountry.com news for 2017.

There are vibrant communities surrounding our favorite mountain towns, and one way to celebrate that community is to shop locally at a farmer’s market. Whether you’re a regular or a visitor exploring a new place, a farmer’s market is a great way to experience the flavors and culture of small-town life.

For those with big lungs, tree-trunk quads and a desire to spend hours on a mountain bike -- or folks who enjoy watching them -- the mountains all across the country are an endurance racer’s heaven. 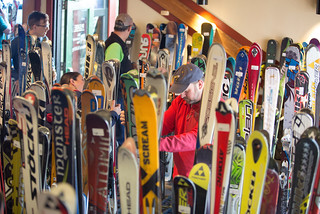 Ski swaps offer a convenient and inexpensive way to fill in your current ski and snowboarding equipment or accessories. It's also a great place to try to sell some items you no longer need or want.