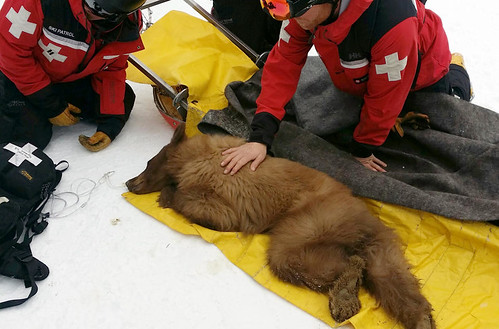 News reports out of Lake Tahoe, Calif. tell of a year-old black bear who can’t seem to keep himself away from life at Heavenly Ski Resort. Now he’s headed to an animal sanctuary or zoo.

Dubbed “Heavenly,” the bear was first captured in March after it decided to settle in next to a ski lift. Veterinarians at the Lake Tahoe Wildlife Center nursed him back to health after discovering a shoulder puncture wound and some scraped foot pads. Officials then released the bear back into the wilderness last week near Monitor Pass, some 25 miles away.

That didn’t deter the ski resort loving Heavenly, who came back within a matter of days and began approaching people again.

Wildlife spokesman Chris Healy told the Associated Press, “It’s the exact same bear.” The first plan was to try again – this time 50 miles away, but Healy said they decided the bear has just become so acclimated to humans as a source of food that he has honed in on the ski resort area.

Heavenly had to shut down one ski lift for about an hour March 3 after the injured bear was seen limping up the hill and then lay down near the lift shack. Ski Patrollers helped transport him downhill.