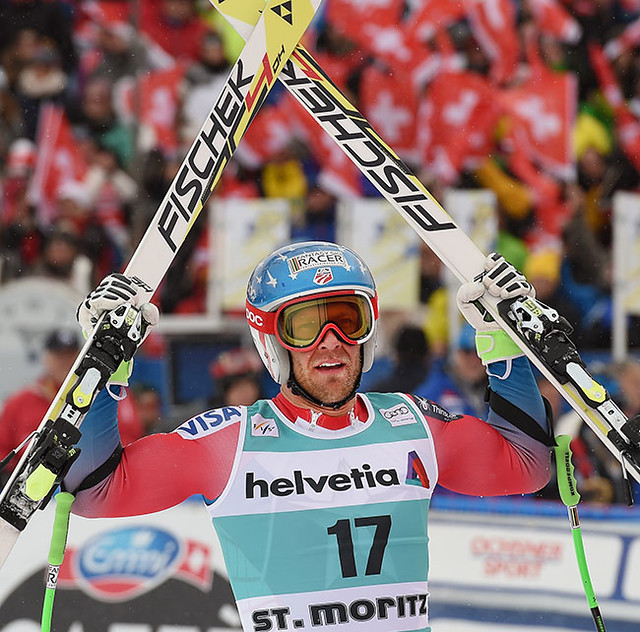 Nine American athletes are competing in the World Cup Finals, where the top 25 ranked athletes in each discipline descend upon St. Moritz. Fans will be able to follow the action live on NBCSN and via live streaming on NBC Sports Live Extra with more than 15 hours of coverage, including the downhill, super G, team event, giant slalom and slalom events.

“I skied really, really well today,” Nyman said. “I nailed the top … but the last turn I was a little to shallow and didn’t carry the speed I needed too and that’s where Beat (Feuz) got me and took the lead.”

Switzerland’s Feuz won the race, finishing just 0.08 ahead of Nyman – or just 2.39 meters, which is about the length of a downhill ski. Canada’s Erik Guay was third – his best downhill result of the season. Travis Ganong (Squaw Valley, CA) was sixth, while Andrew Weibrecht (Lake Placid, NY) was 21st. Peter Fill finished 10th, but scored just enough points to become the first Italian to win the overall World Cup downhill Crystal Globe.

After the Lenzerheide races, the women drove to St. Moritz for downhill training Monday morning. Training runs on Monday and Tuesday both proved to be a challenge as many women struggled to make all of the gates. But Ross and Cook both showed promise, finishing in the top 10 both days, with Ross finishing in third on Tuesday. The Swiss women will be strong contenders on home snow with Lara Gut, Corinne Suter and Fabienne Suter all skiing strong on training days. Keep an eye out for Lichtenstein’s Tina Weirather, too.

It was a quick turnaround for the men, who traveled back from Kvitfjell, Norway and jumped right into action with their first and only downhill training run on Tuesday. On a new track with no trees, it’s a challenge to know where you’re going when skiing at 90 mph, but it didn’t seem to bother Italians Peter Fill and Christof Innerhofer, who sandwiched Switzerland’s Beat Feuz for the top three.

Noticeably missing at World Cup Finals this year is Lindsey Vonn (Vail, CO), who will travel to St. Moritz on Wednesday to accept her record 20th crystal globe for the downhill discipline. After sustaining a knee injury in Soldeu-El-Tarter, Andorra, Vonn made the tough decision to sit out the rest of the season. This opened the door for Switzerland’s Lara Gut to continue her quest for the overall globe.