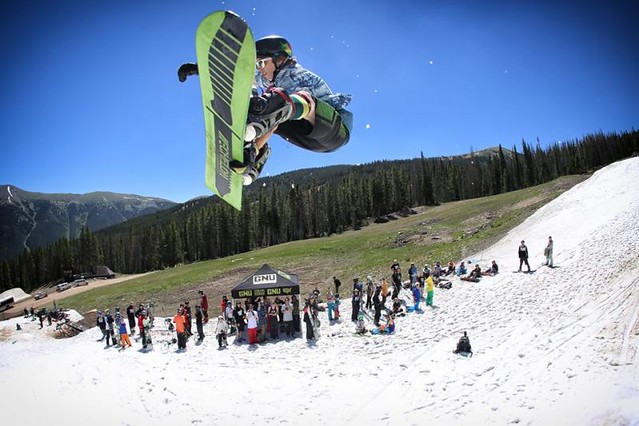 For terrain parkers, the end of the winter ski and snowboard season means more than six long months of life without a jib, jump or butter box – unless you got the bread for some time at Woodward.

In recent years, the company that began in the Pennsylvania town of the same name has branched westward -- to Copper Mountain in Colorado and Boreal Mountain Resort in the California High Sierra. The camps’ brochures include many of the multi-day and week-long warm weather offerings that Woodward started with: skateboarding, mountain biking, BMX and cheerleading.

But with that presence in the Rockies and Sierra has come another benefit: snow.

As long as nighttime temperatures permit, mountain crews will turn on the snowmaking guns to keep parks and pipes covered with the white stuff.

At Woodward Tahoe at Boreal, operators are optimistic that on-snow sessions will run into mid-July. At Woodward Copper, cool temps at the 9,700-foot elevation at the base should permit snowmaking right through the month of July. One of three parks will be set aside for public, non-camper use on Saturdays into August (hopefully).

Another benefit is the opportunity to work alongside world-class freestylers who come up to Boreal and Copper for summer training.

Here are some details on the camps at Boreal and Copper:

Located on Donner Pass in Truckee, Calif., Woodward Tahoe runs week-long snowboard and freeski camps starting June 14. The first four camps get the snow before it melts – or gets too warm to make it – on a private park with its own quad lift. Each day includes time in the indoor Bunker, honing skills on trampolines and foam pits. Fee of $1,699 ($100 off before April 30) includes park access, instruction both indoors and outdoors, food and overnight bunkhouse lodging.

Right on I-70 in Summit County, Woodward Copper has three terrain parks stoked up for the summer. Week-long session for everyone eight years and older begin June 7 through end of July. Last session in July is a four-day “specialty” session, and there’s an adult-only week June 28-July 2. Full overnight rate is $1,799, with day rate (no lodging) at $1,599. Shorter sessions cost less.