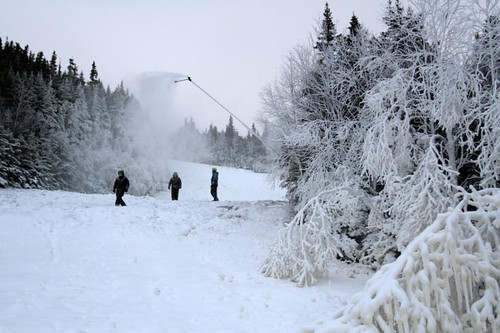 Some $2 million dollars has been invested to dramatically improve the snowmaking efficiency and output of the system.

Wildcat worked with some of the industry's leading snowmaking equipment manufacturers during the 2013/14 season in what is believed to be the largest testing and demonstration project ever conducted at any mountain in the East.

Following successful tests in a variety of weather conditions, delivery of new snow guns from HKD and Snow Logic began arriving this summer and fall.

Peak Resorts recently announced an expansion of the project. An additional $330,000 was approved to acquire 96 more high efficiency units. The total investment in new guns now totals more than $800,000. Trails that will directly benefit from the snowmaking improvement project include Polecat, Lynx, Upper Catapult, Middle Wildcat, Wild Kitten, and Bobcat.

Excavation of a functioning work road to and the area around the top of Middle Lynx was required to accommodate demolition of the old pump house and allow access for cement trucks to build a new foundation complete with custom grated cement floor.

From the early planning stage, the goal of the project has been to modernize and improve how efficiently the snowmaking system operates, which was a factor when deciding which technology to purchase.

Meanwhile, at Attitash, another Peak Resort, improvements were also made to the snowmaking plant. Installation of new snowmaking water and air pipes, rebuilding of pumps and motors and the installation of a combination of 285 new, high-efficiency, low-energy HKD and Snow Logic brand snow guns have been added.