More than a hundred wildfires in the mountains of the moisture-starved Pacific Coast have yet to cause any damage to ski and snowboard resorts, although a small fire near Snow Summit and Bear Mountain forced temporary evacuations and closures around the Southern California slopes.

The Incident Information System reported Monday (Aug. 24) afternoon that the Summit Fire, located between Snow Summit and Bear Mountain Resort above Big Bear Lake, is 50 percent contained. About 100 acres of timber and grass were burned by the fire, which has an undetermined origin. Residents are set to return to their homes soon, fire officials said. 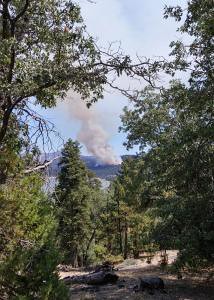 "Today, things seem to be cooling down," Forest Service spokesman Chon Bribiescas told local media outlets. "Because we're in a four-year drought, all these fuels are very, very receptive to ignition. Where it started and where its been burning has a lot of very heavy timber and very thick brush."

Local news reports indicate that Snow Summit snowmaking guns, designed to shoot artificial snow onto slopes in the winter, were loaded up and used to dampen brush near the slopes and trails.

Summer activities at both Bear Mountain and Snow Summit have been suspended by request of U.S. Forest Service officials, but expected to reopen later in the week.

Farther north, a rash of wildfires that have burning this summer in the mountains of Washington, Oregon, Idaho and Alaska. None have been reported to be threatening any ski and snowboard mountains, although several are within sight of resorts and smoke from these fires has made it as far south as Albuquerque, New Mexico.

“At this point there are no ski areas that have been damaged by fire,” Pacific Northwest Ski Area Association’s John Gifford told SnoCountry.com. “In north central Washington one ski area is close to the fires – Loup Loup -- but has not be involved.”