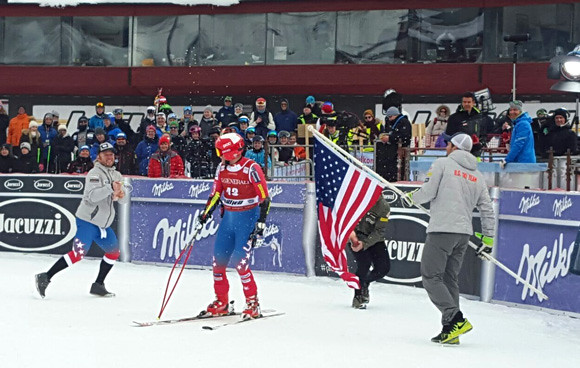 “I got caught in some soft snow down at the bottom, but that’s just how it goes – made a mistake and lost some time – but it was a good race and I’m happy with it,” said Weibrecht, who finished fifth Sunday. Travis Ganong (Squaw Valley, CA) was 14th and Steven Nyman (Sundance, UT) was 17th.

In the hunt for the overall World Cup super G title, Norway’s Aleksander Aamodt Kilde finished fourth Sunday and holds a 25-point lead over injured countryman Aksel Lund Svindal with one race remaining next week at the World Cup Finals. Kriechmayr also remains in the hunt in third, just 37 points back. Weibrecht is fifth overall, 91 points behind Kilde.

Sunday’s race was the final World Cup start in the 16-year career for Marco Sullivan (Squaw Valley, CA), who announced his retirement following Saturday’s downhill – his 105th career World Cup downhill where he finished 18th. Sullivan finished 36th Saturday, and was presented with the #AmericanDowhiller denim vest by his teammates in the finish, along with a champagne shower.

“Marco is the guy when I was first on the U.S. Ski Team that we were all watching and paying attention to,” Weibrecht said. “He has been a huge influence on my skiing. He’s been a huge mentor to me. It’s too bad to see him go; we all wish him the best.”

Up next, the men and women’s tour converge in St. Moritz, Switzerland for the World Cup Finals with downhill training getting underway Monday for the women.