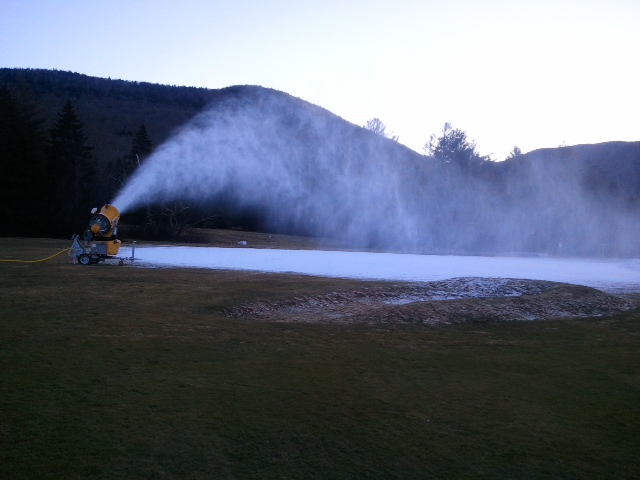 Waterville Valley Resort and the Waterville Valley Black and Blue Trail Smashers (WVBBTS) / Snowsports Educational Foundationhave announced a joint project that is expected to yield significant upgrades in snowmaking for the 2014/15 season. T

The resort and the snowsports foundation will make a combined investment of more than $250,000. There will be seven new fan guns as well as additional improvements and upgrades made to the existing snowmaking system. Waterville Valley Resort invested another $500,000 in snowmaking and improvements in 2010.

“WVBBTS has always been an important part of the community here in Waterville Valley,” said Waterville CEO Chris Sununu. “Their coaches and facilities have groomed some of the finest winter athletes in America, as shown by the number of them competing in Sochi this past winter.”

The new high efficiency fan guns, six TechnoAlpin T40’s and one TF10, have the ability to make snow at 29 degrees and below that are outside the operative range of most existing guns at the resort.

Existing snowmaking equipment will be freed up to be used on other parts of the mountain. This will allow for greater and higher quality coverage from top to bottom. It also prepares the resort for snowmaking that will have to be allocated for the Green Peak Expansion project. The Nordic system and tubing hill will be able to receive extra snow as well.

Photo: Snowmaking at Waterville will be enhanced for new season (Waterville Valley)