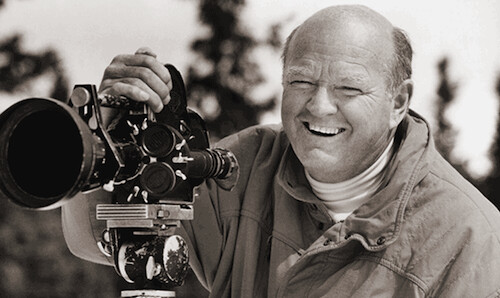 The rain has been slanting down here in the Northwest for the last three days. Last night when it blew 63 miles an hour it doesn’t take much intelligence to know that in a very short time the chairlifts will be starting up once again.

YMCAs and health clubs everywhere are starting their shape-up programs for skiing that are advertised any way and in every way they can afford to get the word out.

I was pretty lucky because I stayed in shape during the summer months while I was editing my films by surfing at least two or more times a week. In those days I surfed from sun up until about 8 a.m. I could still get in a full day’s work because all I had to commute was about a mile to my office from my home.

How many people do you know or are you one of them, who spend an hour or more commuting each way to and from work? Remember, if you are one of those commuters you are wasting 10 or more hours a week or 500 or more hours a year.

Wouldn’t you prefer to find something better to do with those 500+ hours you commute back and forth to the suburbs so your children can have a bigger backyard that they don’t use?

It’s simple to reach a conclusion of what to do with the rest of your life by taking your hourly rate at work multiplying it by those 500+ hours and that could buy your ticket to freedom to go and live at the ski resort of your choice.

When you ask people who are skiers, “Why do you live in suburbia and work in the city?” They usually have one of three answers: I live here because my parents live here. My children will be out of high school and go away to college within eight years. Or this is where I was born.

I was over 60 years old before I had my business in shape so that I could retire and build a home in a ski resort and work out of it. I can still remember the excitement I felt the first day I walked out of that house in my ski clothes with my skis over my shoulder to go ride the gondola at Lionshead in Vail.

I had completed my tour of duty in my office in downtown Hermosa Beach, California, but it was two short city blocks from the ocean so I could throw my surfboard in the water during my lunch hour and ride a few waves to relax. That was good compensation for having to live in a city.

My wife tells me I spent my whole life playing and I would be the last one in the world to argue with her about that position.

When I got out of the Navy in the summer of 1946 I bought a $200 homemade teardrop trailer and three months later went on a ski trip that still continues to this day.

I know my films have ruined many parent-children relationships when I said years ago if you don’t do it this year, you will be one year older when you do. I officially dropped out of college and went skiing for the rest of my life. Today, a lot of young people decide that if they load chairlifts or shovel snow for a year or two they can work their way up into a management position and not have a $300,000 student loan to pay off.

While you’re living in the city you are merely paying rent to house all of your physical possessions and if you really want to go skiing for seven days out of 365 days you will still have to pay storage on all of those possessions. I think the proper term for all of those material possessions is status symbols.

It doesn’t matter whether you live in a walk-up apartment somewhere or have 10 acres and a $9 million house in Beverly Hills, when you’re standing on the side of a hill looking down at untracked powder snow don’t wait, jump into it and track it up. Those first track turns are instantly burnt into the hard drive in your brain and no one can ever take them away.

As in many areas of life there are no directions on the plan of “how to become a ski resort employee.’”

Laurie and I spend our winters in Montana where they have 650 employees. You can pick out almost any profession ranging from a computer operator to a snow-cat driver to waitress, waiter, ski instructor plus all the jobs that make that size of a community running smoothly. There is a job somewhere there to fit your talents.

Or what about Vail, Colorado where on a good Saturday or Sunday they host as many as 26,000 skiers and snowboarders. It takes a lot of employees to handle that many customers for 10 or 12 hours a day. There has to be a job just waiting there for your talents.

It’s a bit harder to trade your life in the city for a life in a ski resort when you have a family. Believe it or not a ski resort is a microcosm of the city that you currently live in. From schools to hospitals and everything in between, here in America things such as a ski resort lifestyle are attainable to anyone that really wants one and all you have to do is want one bad enough. Just Google human resources at all of the major resorts in North America and I am sure is a job waiting just for you and your talent.

I’ll assume for a moment that you are either in college or have graduated from high school at least and it was a major step to move out of your parents home but by now you’re on your own and what’s wrong with spending your life doing what you want to do?

Many of the ski resort staff will tell you that they are busier in the summer than they are in the winter so when you get a job at a ski resort pick two different ones so that you can work on a year-round basis, that way you’re not doing the same thing 50 weeks a year, or if you just want to ski year round, choose a resort down under for our summer season, their winter.

There are countless stories of people who started with nothing and became very successful working in a ski resort. For example, Klaus Obermeyer arrived in America with a $10 bill in his pocket and a couple of pair of lederhosen. He hitchhiked to Sun Valley, then went on to Aspen where he started teaching skiing and making ski parkas. Today his company grosses $30 million dollars a year.

Another good friend, Ed Siegel, has chosen to live in Sun Valley, Idaho where he practiced his profession as an alcoholic rehab counselor on an almost daily basis unless the snow is really good. He is changing the lives of everyone he talks with.

Just think of all the job possibilities: Aspen has several radio stations, a couple of television stations as does Vail which also has a 100-bed hospital that needs doctors, nurses and administrative staff.

No one is stopping you from moving to that ski resort and spending that 500 hours bonus by not commuting every day. Instead why not spend those hours skiing down the mountain of your choice.

Your life could be changed forever by going on the Internet and looking for job opportunities at a ski resort. Your wife or your husband and your children will also get to see you a couple of extra hours every day which sounds like a good deal to me.