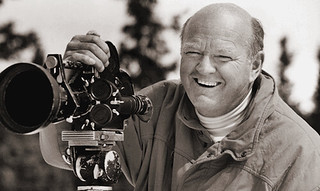 I took a couple of days off from writing my biography and started to sort out about 2,000 still photos that pertain to my skiing and surfing life I have accumulated over the years.

Now I have to make the decisions on which ones to include in the finished book. Many of them are historical photos, some of which I have used over the years in my press kits I sent to the sponsors of my ski films.

A great example is one of Sun Valley from the top of Dollar Mountain when there was nothing there except the Lodge. It looked lonely out there in the middle of that wide valley. There are also some photos of the Lodge under construction before there was a chairlift on Dollar.

I have a great photo of Mt. Baldy in the background with my car and trailer in front of the Lodge. This was back when there were only two runs down from the Round House - Canyon and Exhibition - and both of them had Volkswagen-sized bumps on them.

One of my favorite shots is of a still cameraman with a four-by-five- speed graphic at the ready riding down the hill on the back of a ski instructor.

Ruud Mountain was different place back then, as there was sometimes a 15-minute lift line where megabuck homes are located today. If the lift on Ruud still operated, it would still be a great place to ski.

I carved a lot of powder snow turns there in 1947 on a pair of very flexible skis I somehow acquired. It had such a great fall-line and often I had that whole mountain virtually to myself, except when the snow on Baldy was thin and all employees had to ski on Ruud.

There is also a shot of the Squaw Valley Ski School when there were only five of us to give lessons in the new ‘French Ski Technique.’ That was when the old number one chairlift stopped at the bottom of the headwall because no one could ski well enough yet to handle the terrain.

I have several still photos of Pete Siebert in knee-deep, untracked powder at Vail when it opened in 1962. There was only a gondola, two chairlifts, a Poma lift and no lift lines at all. As a matter of fact, there were a lot of days when there were only 50 people on the mountain. One day they only sold eight lift tickets.

Some of the European stills of scenery are so full of memories that I could write an entire column around each photo. The cable and cog railroad to the top of the pass where you could ski 12 kilometers down to Kublis and get a ride back to the Parsennbahn on the railroad. Each of the thousands of black and white pictures I have tells a different story and most of them trigger a good memory.

It was a different world in Europe in the fifties with all of the great old hospital/tuberculosis sanatoriums converted to hotels on the south slopes. The Parsennbahn had switch-back walking trails clear up to the summit for people who were afraid to try a pair of ‘wings of wood.’

In 1953 many of them were World War II survivors, some of whom bore the tattoo of a concentration camp. Two friends of mine bore those tattoos and were proud they were able to survive and build a life. Both worked for an airline and wore blouses with short sleeves so the tattoos would show. Both of those ladies were stewardesses and flew back and forth from Zurich to New York while skiing every day between their flights.

Then there’s a photo of Snowbird before there was a Snowbird. It was created by the imagination of Ted Johnson and the money of Dick Bass.

There is a shot of a French poodle standing up on his own skis. Dutch Gunderson who was the manager of the Dollar Mountain restaurant had trained the poodle to turn his skis. When he whistled twice the poodle looked to the left and when he whistled once he looked to the right. That would put its weight on one ski or the other and the skis would turn. Unfortunately, the poodle died before I started making ski movies. I know that dog would have been a great hit with my audiences.

Another picture is of where I loved to ski:  Zurs, Austria when it only had two T-bars and lots of untracked powder snow. I was always guaranteed a powder snow sequence whenever I went there. Herbert Jochum developed my favorite inn there and I loved going back to see him. The snow banks in Zurs in those days were nine feet high every year I went there.

I had a good friend who was an underground money changer making a living on the difference between Austrian shillings for travelers checks at the bank or at a hotel front desk. He had been captured in the early years of the war with Germany and shipped to a POW camp in Texas. There he learned his English with a deep Texan drawl.

I wish I had been making sound movies when we talked as it was really funny to listen to him switch from a Tyrolean accent in German to an American/Texan accent in the middle of a sentence.

Since 1924, when I was born, this country has seen a lot of wars, and the world has gone from ice delivery wagons being horse-drawn, as they made their way down the street where I lived for a while, to an almost literal ‘instant anything’, like 300-mile-an-hour bullet trains, and jet passenger airliners.

What changes will my grandchildren see? Fortunately for them and a lot of other people, I have a photo record from when I first started making ski movies, back when there was only 15 chairlifts in the country.

I wonder how many there are now.