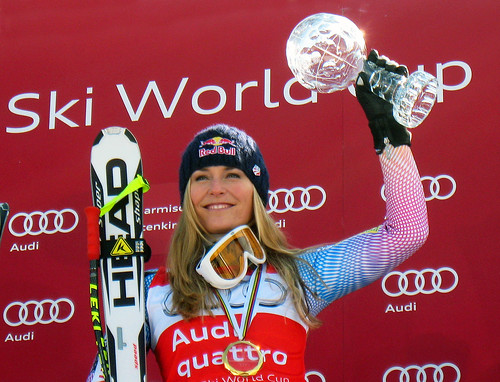 “I still have to stay focused on the race everyday and I can’t think about the records, or the future, or the points,” said Vonn after wrapping up a record 20th crystal globe, breaking Swede Ingemar Stenmark record of 19.

Up next, the ladies race super G Sunday.

The light was flat on the hill, but Friday’s heavy snow let up and left the track in clean condition. Only Dominik Paris was able to sneak past him to take the win, while Beat Feuz of Switzerland was third.

“I skied well for the most part. I had a mistake on the first split and was a little wild through a couple splits,” said Nyman. “I let the skis keep going - hats off to my technician. He prepared some rocket ships. I’m good at tucking, so I had a great bottom.”

It was Nyman’s second podium in two weeks, having taken third in the Jeongseon World Cup, a 2018 PyeongChang Olympic test event.

Andrew Weibrecht was the only other American to finish in the points, taking 18th.

The men and women next head to Stockholm for a city technical event Tuesday. The speed team has several weeks off before traveling to Kvetfjell, Norway for downhill and super G in March.