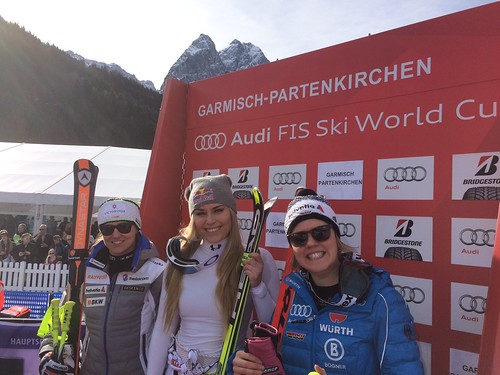 “It was a great day!” Vonn said. “Every day is a new chance to break my own record, which is kind of weird to say, but it still makes it exciting. Every win for me is more special than the last. And my dad is here, so it’s really special.”

“I could see that there where some problems,” Vonn said watching from the top. “There were some bumps, and the problem is that the bumps were right in the compressions, and also where there were shadows, so you couldn’t really see anything.

On a beautiful sunny day in South Korea, the men got a chance to race the manicured PyeongChang downhill course. While there wasn’t much natural snow, the manmade surface held up for the 54 racers.

Nyman stomped a fast run on the short track that heralded his gliding specialty, but Attacking Viking Kjetil Jansrud of Norway snuck ahead of him to take first with Dominik Paris of Italy on Jansrud’s heels in second.

Next up, the men race super G down the Jeongseon track.