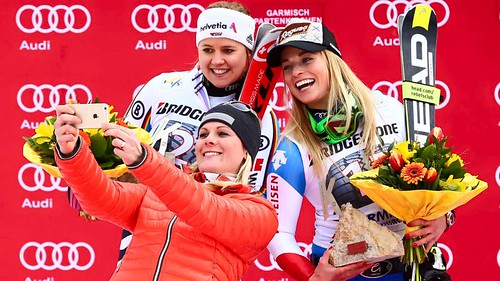 The battle for the overall World Cup title heated up again on a warm, springlike day at the Audi FIS Ski World Cup as Switzerland’s Lara Gut got the best of Lindsey Vonn in Sunday’s Kandahar super G at Garmisch, Germany

Vonn was gunning for World Cup win No. 77 following her commanding victory in Saturday’s downhill, but Gut, who finished a disappointing 14th Saturday, rebounded to take her 16th World Cup win.

Germany’s Viktoria Rebensburg, third in the downhill, finished second in the super G. Vonn settled for third Sunday after making a brilliant recovery five gates from the finish, when her right ski went airborne after hitting a bump in the snow.

“The snow was soft, like spring,” Vonn said. “I didn’t risk everything, I probably could have, but I feel like I’m older and wiser now, and to get to the finish healthy and be in third is still a pretty darn good day.

With Sunday’s victory, Gut's 973 total points is now 87 points behind Vonn's 1060 points in the back-and-forth chase for the over World Cup title. Rebensburg is third overall with 820. Vonn also leads the World Cup super G standings by 99 points over Gut.