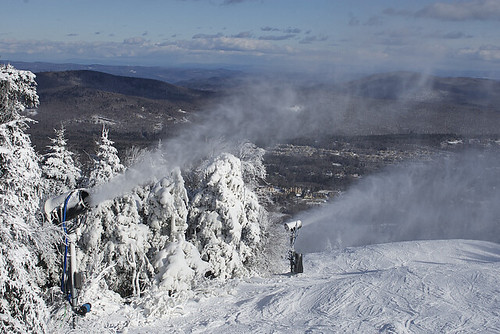 Vermont resorts will expand the efficiency, quality and coverage of their snowmaking systems for the 2014-15 season as part of a nearly $15 million upgrade in partnership with Efficiency Vermont's Great Snow Gun Roundup supports the purchase of approximately 2300 new low energy snow guns for the upcoming season, and in return the resorts will donate 1800 older model snow guns to scrap.

The estimated annual energy savings from this swap is 10,500 MWh and 31,000 MMBtu. That means saving enough electricity to supply approximately 1,500 Vermont homes for one full year, and enough diesel saved to heat 340 Vermont homes annually. These new guns are not only saving tons of energy for resorts, which will allow them to rely on less power and lower emissions, but they also will create better quality snow surfaces. Resorts will now blow snow at higher temperatures, extending the Vermont ski and snowboard season.

“An industry-wide upgrade in snowmaking efficiency of this magnitude has never been seen before,” said Parker Riehle, Vermont Ski Areas Association President. “We are very proud of our partnership with Efficiency Vermont and that our resorts are leading the way in switching to low energy technology. We can’t thank Efficiency Vermont enough for their dedication to the Vermont ski industry.”

“There is huge opportunity for Efficiency Vermont to work with ski areas to assess snow guns, monitor energy consumption, and offer tools to manage energy usage in real time.  Ski areas are the cornerstones of business in their community, and we are excited to help support those communities to be more energy efficient, Kelly Lucci, Efficiency Vermont Public Affairs Manager told SnoCountry.com. “We worked with snow gun manufacturers and ski resorts to act as a third party service to look at the mountain holistically and analyze which guns would work best at each particular resort.”

Reductions in Vermont’s overall electric usage - such as those that will be realized through this year’s large scale snow gun upgrades - help prevent the need to build expensive new power plants and transmission lines, saving all ratepayers over the long term.

Killington Resort is investing in nearly 400 new energy-efficient snow guns as a part of Efficiency Vermont’s Great Snow Gun Roundup. This latest investment of snow guns is valued at more than $2 million, with additional $91,000 in installation costs.

“We are building an arsenal with the ideal balance of portability and flexibility for all conditions,” says Dave Lacombe, Killington's snow surfaces manager. “Modern, energy-efficient snow guns require up to 85 percent less energy to operate than older snow gun models, and the new snow guns being installed this year represent the most advanced, energy-efficient technology available,” adds Lacombe.

“The Efficiency Vermont Program has helped us take a giant step forward in energy conservation and management,” says Jeff Temple, Killington's director of mountain operations. “We are committed as a company to be actively engaged in environmental issues both regionally and globally and this program certainly helps towards those goals.

“The correlation of higher efficiency and higher snow output is quite a remarkable thing,” said Mount Snow’s Director of Mountain Operations, Dave Moulton. “We will be saving a tremendous amount of power, which will ultimately reduce our carbon footprint, while also producing more high-quality snow for our guests to enjoy.”

Efficiency Vermont has also pledged to donate proceeds from the scrapped metal of old snow guns to Ski Vermont’s Learn to Turn program, which encourages people to embrace winter and try skiing or riding through Learn to Ski and Snowboard month, the Fifth Grade Passport and Bring a Friend challenge.