Vail's Avanti Lift To Be Upgraded On Front Of Mountain 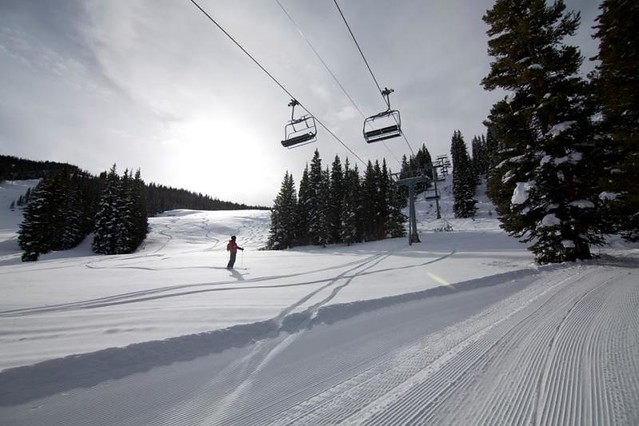 Continuing an effort to upgrade its lift system, Vail Mountain has unveiled plans to replace the 25-year-old Avanti Express on the front of the mountain.

Slated for next summer if the U.S. Forest Service approves, the project would increase per-chair seating from four to six on the detachable high-speed chair that opened in 1989 for the alpine world championships at Vail. The chairlift ferries skiers and riders who come down from the top of the main gondola at Mid-Vail to the western side of the resort.

Vail officials say the upgrade will increase the current 2,800 riders per-hour uphill capacity by 30 percent so that skiers and snowboarders can get to the Wildwood and Eagle Nest areas more quickly.

"Avanti Express Lift (#2) is one of the most utilized chairlifts on Vail Mountain,” said Vail’s Liz Biebl. “It’s centrally positioned on the front side of the mountain providing access east toward the Mid-Vail area, south to Game Creek Bowl and west toward Lionshead. Upgrading the lift will improve its reliability, reduce downtime and move more people around the mountain faster than we’re currently able to."

The upgraded six-passenger lift will be similar to what Vail did to the Mountain Express high-speed chair that runs from Mid-Vail to the summit. Reconstructed for the 2013-2014 season, the Mountain Express features a loading conveyor and gates to speed skiers and ‘boarders onto the lift.

The major lift renovation effort essentially began in 2007 with two new high-speed quads, including the Highline Express. In 2010, High Noon in the back bowls came on line so that all Vail terrain was accessible by high-speed detachable chairlifts.

In 2012, the venerable Vista Bahn gondola up the front became the 10-seat Gondola One and, in 2013, the last double chair on Gopher Hill was upgraded.