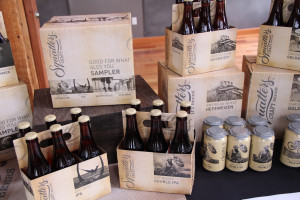 Squatter’s Craft Beers is growing up and I don’t know how I feel about that. Same for its brother brand Wasatch Brewery.

The two icons of the Utah craft brew revolution, the ones with the edgy sense of humor aimed squarely at the Utah way of life, are going for a cleaner, crisper and, in Squatter’s case, a more nostalgic look. It’s like the ski bum who now shaves and wears dress slacks. Squatter’s and Wasatch have matured.

By the time I got to Park City, Squatter’s Pub Brewery in Salt Lake City was giving Wasatch Beers and Brewpub, Utah’s first microbrewery est. 1989, a run for their money. They consistently one-upped each other with brews like the Wasatch 1st Amendment Lager ("Exercise your First Amendment right to a great beer") created after Utah imposed a beer excise tax.

Like most non-Mormons in Utah, I connected with the daring sense of humor. By 2000, the two companies merged to form Utah Brewers Cooperative; you distinguish between them as the maltier tasting Wasatch appeals more to younger palettes while the hoppy Squatters’ blends tend to attract the drinks and dinner crowd.

The loud labels reflected the rebellious Park City past - mine and theirs. So does a tamer beer-look mean I too must mature? I drink wine now but I want my beer to be fun.

I was reassured at today’s brand launch that the irreverence is still there. We’ll still see beers like Polygamy Porter (where you can’t have just one) or Provo Girl (enjoy her in a toolshed) but they will now be smartly dressed. And customers are buying it.

“It’s been a whirlwind these last few months,” said Wasatch founder Greg Schirf. “Growth is over 43 percent year-to-date and that’s before all our new packaging is fully implemented.”

Wasatch brews will now feature popping colors on a solid black label, while Squatter’s beers, in celebration of their 25th anniversary, recall a bit of history with sepia-tinged labels and artsy images. Squatter’s has also rolled out two new flavors for the summer- Bumper Crop Honey Ale and Wee Peat Scottish Ale.

Last year, the Co-op introduced their beer in cans so you can take the party where bottles shouldn’t go. The new flavors are perfect for tubing on the Weber River and one-handed dancing at the local concert series at Deer Valley or Newpark. See? We don’t have to grow up just because the look changes.