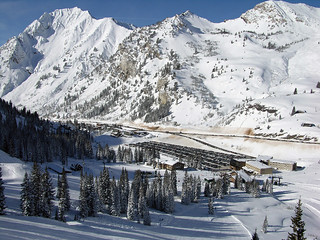 Utah’s controversial Mountain Accord plan got off the ground in July with the unanimous endorsement of a quartet of proposed land swaps between Utah ski and snowboard resorts and the U.S. Forest Service. The land exchanges at Alta, Snowbird, Solitude and Brighton signal a commitment for backcountry conservation among elected officials, government agencies, and representatives of private business and non-profit organizations.

By accepting the land swaps around the base areas of the resorts – and a few in-boundary permit expansions -- Mountain Accord promoters have taken further lift accessible terrain expansion off the table.“The general idea was to preserve backcountry and that has moved forward with this agreement,” SkiUtah’s Nathan Rafferty told SnoCountry.com. “It’s a big step that we got to this point, and everyone is still nodding their heads.”

One Wasatch, a sweeping plan for connectivity among Utah’s northern resorts, remains viable, Rafferty said. While tunnels and trains are proposed, the “easiest” solutions are ski lifts that connect the seven Wasatch resorts.

In addition, the initial handshakes set in motion an effort to get the central Wasatch Range designated as a National Conservation and Recreation Area which, when approved, would further prohibit expansion beyond existing area boundaries.

“The different thing about this designation is that we write the rules,” Rafferty said. “There’s no template so what we want is what we will ask for.”

Next season, skiers and riders likely won’t any physical changes at the four Big and Little Cottonwood Canyon resorts; most development require extensive federal review. But the land swaps give these resorts a chance to realize their plans for base area development. Those include:

· Alta exchanged 603 acres in Grizzly Gulch, Devil's Castle and on Emma Ridge for 160 acres at its base, where more lodging and retail – and the water to serve them – are planned. The agreement requires Alta to shelve plans for lift up Flagstaff Mountain across the canyon.

· Solitude gave up 240 acres at the head of Big Cottonwood Canyon and agreed to improve backcountry access to Silver Fork Canyon in exchange for 50 acres around the base for a hotel, and 15 acres for lift realignment in Honeycomb Canyon.

· Brighton exchanged 200 of private land on the mountain for 15 acres for a base hotel, and a permit expansion of 175 acres in Hidden Canyon.

Scheduled to be signed this summer, the Mountain Accord, according to its website, “represents a public statement of commitment to proceed with the agreed-upon actions with the goal to ensure the activities … will continue while protecting the valuable watershed and sensitive environmental area."

Photos: Top - Alta's base area will see more lodging and retail as part of the land swaps (Alta); Bottom - Map of Mountain Accord "handshake" deal (MountainAccord.com) 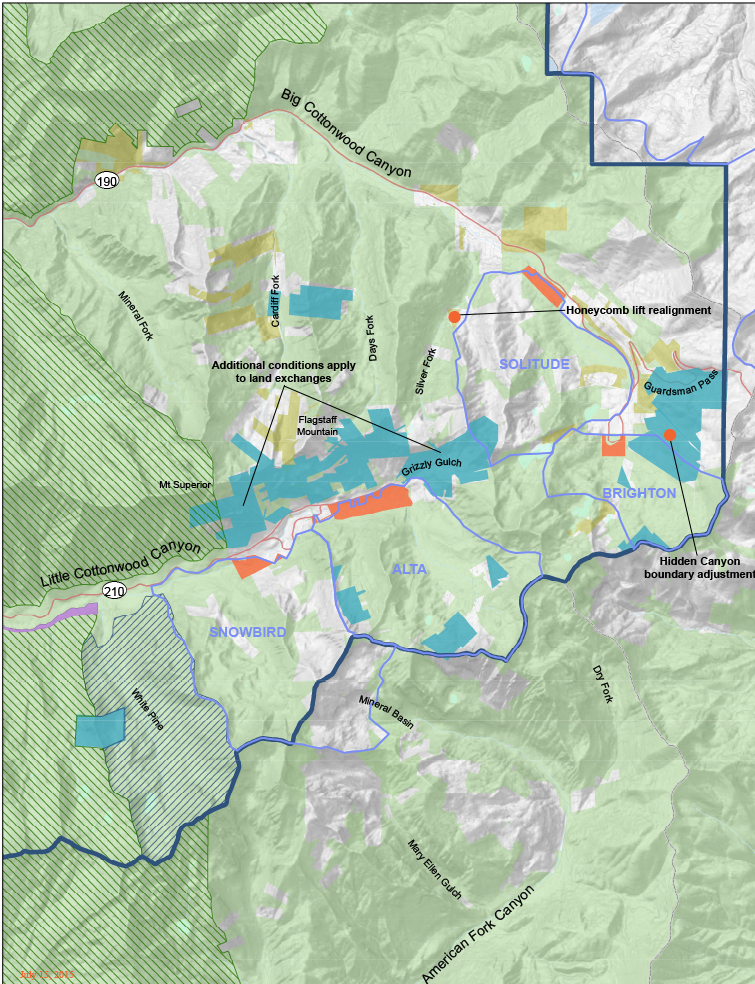