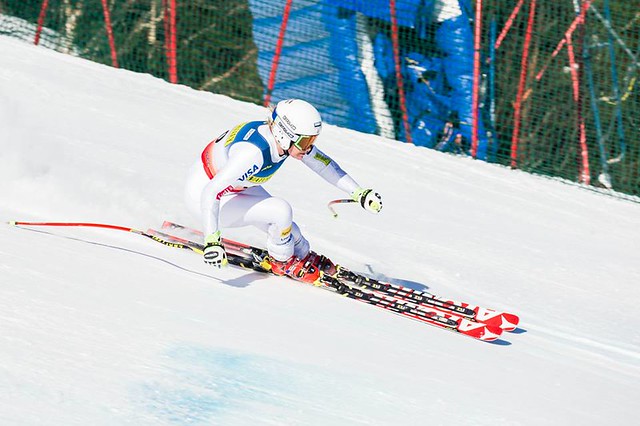 The course down Sugarloaf's Narrow Gauge trail was smooth and perfect for the women, with racers smiling in the sun-drenched finish corral. McKennis, who has come back from a serious injury this season, snuck in the win over Valerie Grenier of Canada by one tenth. Jackie Wiles (Aurora, OR) was third, and D Teamer Breezy Johnson (Victor, ID) was fourth. Laurenne Ross (Bend, OR), Stacey Cook (Mammoth Mountain, CA), Julia Ford (Plymouth, NH) and Katharine Irwin (Vail, CO) all took spots in the top 10, as well.

This was McKennis’ first U.S. Alpine Champs title—a title she really wanted after a tough season on the World Cup circuit. She had a few shining moments, including a solid 13th place finish in the Garmisch downhill one year after she broke her leg there, but couldn’t crack the top 10 this season in a World Cup. But she’s determined to continue and show the strong speed talent that she has displayed in the past.

The men’s race was an exhilarating adventure, as the crowd had already given Nyman the win. Nyman had thrown down a solid, clean run on the hero snow to grab first place ahead of Ganong, convincing the crowd, his teammates and himself of his victory. But 23 racers after Nyman, young Drew Duffy, wearing bib 30, came down the course and shocked everyone by finishing in first place by four hundredths of a second.

“I’m pretty psyched,” said Duffy after his race, when asked about what he thought when he saw the number one next to his name. “I don’t even know what to think of my run.”

This was Duffy’s first ever U.S. Alpine Championships win, and only his third FIS-level victory. Although he’s had strong results in the past—qualifying him as a invitee to the U.S. Ski Team—his performance was unprecedented when he came down to beat World Cup, World Championships and Olympic medalists.

Next up, the women race GS on Thursday, with the first run beginning at 9:30 a.m. at Sugarloaf.