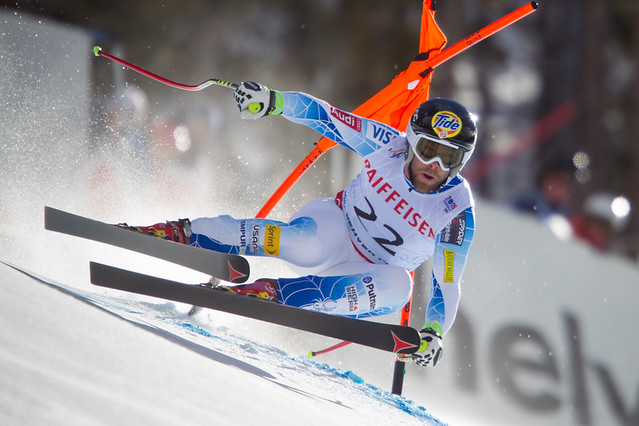 American Travis Ganong found himself sandwiched between two Swiss racers all gracing the podium for the first time at an FIS World Championship. Ganong won a silver medal on the Beaver Creek Birds of Prey course Saturday. The USA's Steve Nyman finished just off the podium by just 0.03 seconds in fourth spot.

The two Swiss racers were Patrick Kueng who soared to World Championship gold and Beat Feuz, who garnered the bronze medal.

“It’s a very good day,” said Ganong, who is from Squaw Valley, Calif., after the race. “I just turned my brain off, put a smile on my face, had some fun and made some good turns. It was almost a perfect run, but it’s definitely the perfect day.”

It was a superb day for the American men, even though it only represented the USA's second medal at this hometown affair in the Vail Valley. (Lindsey Vonn won the bronze in the super-G Monday, but disappointed in the downhill Friday). More than 20,000 fans filled the finish stadium and lined the course.

It was the first World Championship medal for all three skiers in a day that was filled with surprises.

“For the Swiss and for me it’s unbelievable to have two Swiss on the podium,” said Feuz after the race. “This year in Wengen, it was the same and now here on the Birds of Prey, it’s perfect.”

Many of the big names bowed out allowing for the underdogs to steal the spotlight. Kueng’s has only one previous win at the World Cup level, which came in 2014 in Wengen (SUI). Ganong’s previous highest finish at a World Championship was 18th and he just earned his first World Cup victory earlier this season in Santa Caterina, Italy. Feuz’s last World Cup downhill victory came in 2012.

Kueng finished 0.24 ahead of the pack, but the rest of the top six were packed together as a mere 0.21 separated the next five skiers.

With the medals going to the podium newcomers, many of the pre-race favorites were finishing in double digits in the standings. Matthias Mayer (Austria), Hannes Reichelt (Austria) and Kjetil Jansrud (Norway) were 12, 13 and 15, respectively.

It looked like perfect conditions up on the course with blue skies and hard-packed snow, but gusty winds at the top of the course made things tricky throughout the 48 starters.

The Birds of Prey downhill course will have one more chance to show off on Monday when the men’s Alpine Combined takes center stage. The ladies are in action on the Raptor course Sunday in the Alpine Combined, with starts at 10:30 a.m.  (MST) for the downhill followed by the slalom in the afternoon. Vonn plans to compete in the event, but she has not raced slalom in several years, so a medal for her is a longshot.