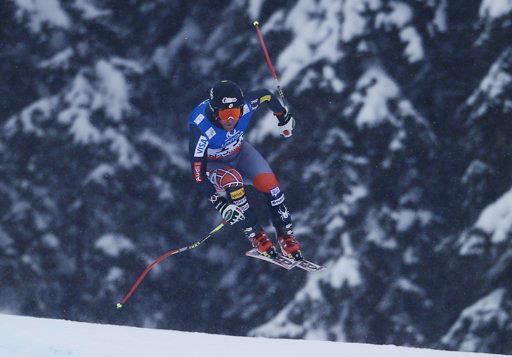 After over two hours of delays, FIS race officials were finally able to squeak one last downhill into February. Fighting flat light and typical thick fog on the Garmisch Kandahar, Marco Sullivan (Squaw Valley, Calif.) was the top American downhiller of the day, finishing in sixth place.

It was another Austrian-dominated day, with Hannes Reichelt winning the race, Romed Baumann in second and Matthias Mayer in third. This is the second Austrian downhill podium sweep in a row, with Mayer, Max Franz and Reichelt taking first, second and third in Saalbach.

Even after hours of delays, the snow was fairly consistent—with 140 volunteers working Friday night until 10 p.m. and starting again at 4 a.m. But because of the light conditions, the track was shortened—beginning at the super G start—which did not suit the classic downhillers usually favored on the Garmisch hill.

The shortened course didn’t seem to faze Marco Sullivan (although he said going from the super G start “kind of neuters the race a little bit”), who was eighth in the training run. Starting 23rd, he attacked the whole way down and took sixth place behind the dominating Austrians. This is his best result since his fifth place finish in Lake Louise in November.

World Cup women couldn’t dodge the fog, with their planned super-G in Bansko, Bulgaria re-scheduled for Monday. A second super-G is planned Tuesday, while a Super Combined (downhill and slalom) is scheduled for Sunday.