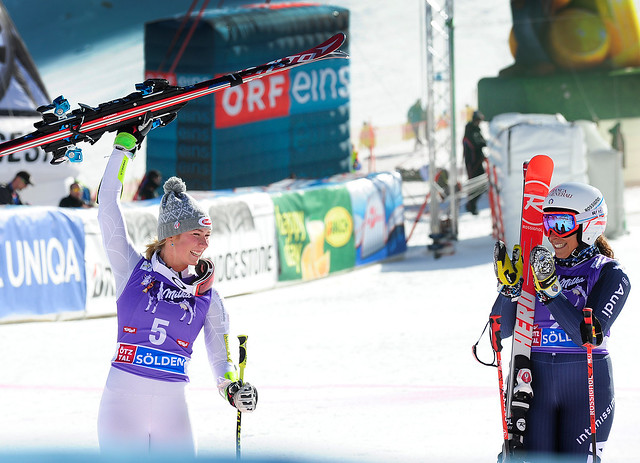 Brignone had stood on the podium seven times without recording a single victory. All that changed on the Rettenbach glacier as Brignone completed two nearly flawless giant slalom runs down a slope so icy the 14,000 fans in attendance could practically see their reflections while watching the competition.

Brignone held nearly a second lead over Shiffrin—who had won last year’s giant slalom in Soelden—after the first run. Although Shiffrin was pleased with her first run, she knew Brignone would be hard to touch. Tina Weirather of Lichtenstein was third.

“I heard that [Brignone] had nearly a perfect run, and I can’t wait to watch it because it’s probably gorgeous skiing and really powerful,” said Shiffrin between runs. “I looked at the time and was like – what can you do?”

Shiffrin’s valiant effort on the second run shaved one-tenth off Brignone’s lead but was only enough for the second step on the podium. Still, the slalom ace was all smiles at the awards ceremony in the finish area as she struggled to uncork a champagne bottle. Although she’s no longer a teenager, she is still only 20 years old.

This was only Shiffrin’s fifth World Cup GS podium, who has been working hard on her GS and super G during the offseason. “I felt really good with my skiing—I felt like I attacked and I had more confidence than I have had in a GS before,” said Shiffrin in the post-race press conference. “I think it’s a good place to start. Just feeling like I can charge down a course and maybe take some risks and actually pull it off – I’ve never felt that before.”