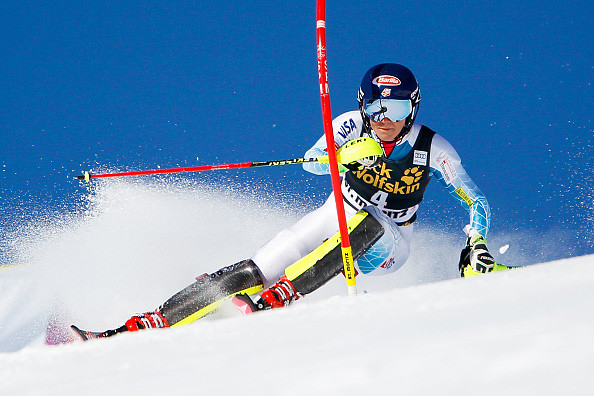 Shiffrin’s winning margin of 2.03 seconds was stunning, especially considering that a number of her top competitors struggled on the grippy snow surface baked by the warm spring sunshine. In Saturday’s race, she left Slovakia’s Veronika Velez Zuzulova in her wake, along with Sweden’s Frida Hansdotter, who finished second and third respectively. Resi Stiegler (Jackson, WY), who was competing at the World Cup Finals for the first time since 2007, was 11th.

Shiffrin won all five World Cup slalom races she competed in this season, with a combined winning time of 10.56 seconds – a 2.11 second average margin of victory. When asked after Saturday’s race if she knows what she’s doing to win races by two seconds or more, she replied with a short answer and a giggle, not giving anything away: “Yeah.”

Shiffrin, the defending Olympic slalom gold medalist and three-time U.S. National Slalom Champion, moved another step ahead of her competition this season, but in the back of her mind, she knows that someday the competition may figure out just what makes her so fast.

“When I watch the video, it just seems like I’m able to be connected with my skis better and quicker (than the other competitors),” she said. “The rhythm changes don’t get to me as much … and that just all adds up. Two seconds, it seems like a lot, but it’s not that much. So I could easily see them figuring that out and coming right back to beat me.”

Injury was the only thing that beat Shiffrin this season. For the first time in her young career, a knee injury sustained prior to the third slalom of the season in Are, Sweden, forced her to miss eight weeks of competition, including six of the 11 World Cup slalom races this season. Hansdotter won the overall World Cup slalom crystal globe after posting five top-five finishes, including one victory, during Shiffrin’s absence. Shiffrin, the three-time defending World Cup slalom champion, finished fourth in the discipline this season.

While confident in her slalom skiing, giant slalom is a whole different game for Shiffrin, who concludes her World Cup season with Sunday’s GS.

“I feel like my slalom is 100 percent,” Shiffrin said. “My GS … the timing is there sometimes. I’m a little uncertain about tomorrow, but I’m going to try my best. My number one goal is to get a good feeling with the timing and the flow. When you see really good GS skiers ski, you’re like ‘I just want to do that!’”