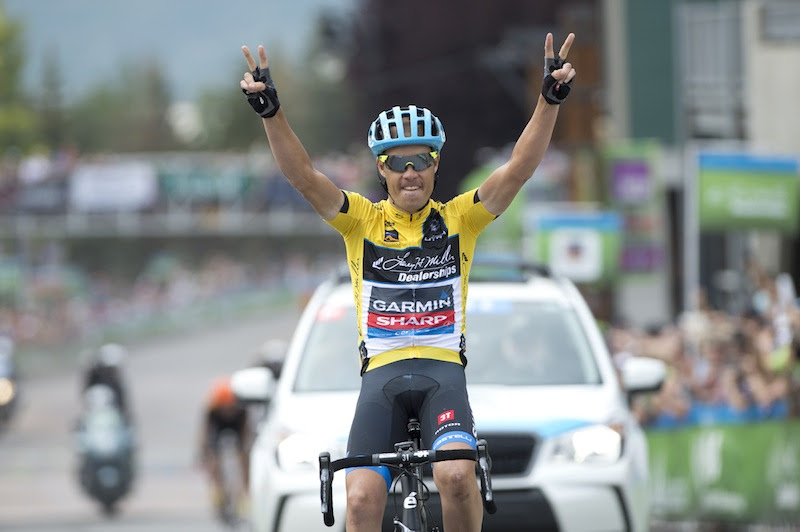 Tom Danielson loves the steeps in Utah just a little bit more than his adopted home state of Colorado … and he’s not talking about the skiing.

The professional cyclist once dubbed “the next Lance Armstrong”recently told VeloNews that the Tour of Utah “is my race” and that “Colorado is a little bit more difficult of a race to win because of the shallower climbs,” referring to next week’s USA Pro Challenge.

Danielson, a longtime Boulder resident who went to college in Durango, is fresh off his second consecutive overall Tour of Utah win in Park City Sunday, Aug. 10, so his preference for the seven-stage Beehive State course was understandable. But Tommy D has come close in Colorado too.

“I’m super excited to be coming back to race the USA Pro Challenge with my Garmin-Sharp teammates,” Danielson said of the Aug. 18-24 event that starts in Aspen and ends in Denver.

“Personally, it’s the one event every year I really look forward to because of the huge and crazy crowds and the general vibe of the race. It’s like no other race. Plus, our team is headquartered in Denver, so we have extra motivation.”

Danielson, a 36-year-old Connecticut native, has finished no worse than seventh in the first three Pro Challenge races, winding up on the podium in third last year behind Aspen native and defending champion Tejay van Garderen, whom Danielson concedes is once again the favorite.

“I’m really looking forward to defending my race title in Colorado this year,” van Garderen said in a press release. “Because it starts in my hometown, it’s different and more relaxed. To race in front of my family and friends is always special. We are bringing a really motivated team and with a summit finish [on 10,800-foot Monarch Mountain] this year, it promises to be another hard race.”

BMC Racing’s Van Garderen is an established American cycling star who’s twice finished fifth overall in the Tour de France (2012 and 2014), turning in the top U.S. times. In 2012 he became just the third American to win Best Young Rider honors at the Tour (top time for under-25 competitors). Only Greg LeMond and Andy Hampsten had previously worn the white jersey.

For the first time in its four-year history the Pro Challenge won’t boast a Tour de France winner when it kicks off in Aspen on Monday, Aug. 18, then heads to Crested Butte on Aug. 19. The event also features stages from Gunnison to Monarch ski area (Aug. 20), a circuit race in Colorado Springs (Aug. 21), Woodland Park to Breckenridge (Aug. 22), the Vail Pass Time Trial (Aug. 23) and the final Boulder to Denver stage on Sunday, Aug. 24.

In its inaugural year of 2011 the Pro Challenge featured the entire Tour de France podium of Cadel Evans, Andy Schleck and his brother Frank Schleck – the first time that had ever happened in an American stage race. Only Trek’s Frank Schleck is back this year as Evans has committed to the conflicting Vuelta a España (Aug. 23-Sept. 14) and Andy Schleck is battling injuries sustained in this year’s Tour de France.

Team Sky, which sent 2012 Tour winner Bradley Wiggins and 2013 Tour winner Chris Froome to Colorado last year, won’t be sending any riders to the 2014 Pro Challenge, and 2014 Tour winner Vincenzo Nibali, who raced in Colorado in 2012 and finished 27th, also will skip the Pro Challenge.

“The race features riders from all over the world and a diverse roster of talent ranging from established veterans to the new generation of incredibly talented young guys,” Hunter said. “The competition this year will be tough and it’s going to be a great show for fans around the world.”

It will also be the final professional race for retiring fan favorite Jens Voigt, a retired German rider for Trek who’s been an outspoken critic of doping and performance-enhancing drugs in cycling. Voigt’s breakaway win from Aspen to Beaver Creekin 2012 remains an iconic Pro Challenge moment.

“I chose the Pro Challenge as my final race because of the fans,” said Voigt, a two-time Tour de France stage winner. “All the fans in Colorado love outdoor activities, so they are all experts. They know exactly how hard it is to go up those crazy-long climbs. It’s a beautiful state and I just always love the warm welcome and the support I get from the fans.”

Photo: Colorado transplant Tom Danielson won the Tour of Utah in Park City on Aug. 10. He hopes to keep the good times rolling in Colorado at the USA Pro Challenge Aug. 18-24 (Garmin-Sharp photo).