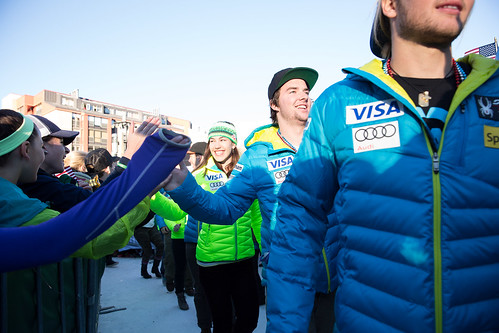 The sun was shining down on Center Village at Copper Mountain, Colo., where a huge crowd congregated for the 2015 U.S. Alpine Ski Team to be introduced during the Nature Valley First Tracks.

Among the 35 athletes named to the A, B, and C teams were stars such as Ted Ligety (Park City, Utah); Lindsey Vonn (Vail, Colo.); Bode Miller (Franconia, N.H.); Mikaela Shiffrin (Eagle-Vail, Colo.); Julia Mancuso (Olympic Valley, Calif.); and Andrew Weibrecht (Lake Placid, N.Y.) The team that will compete in the 2015 World Alpine Skiing Championships in February at Vail/Beaver Creek will be announced Jan. 27.

The alpine team is coming off a year when its racers won five Olympic medals at Sochi, Russia and Ligety and Shiftin winning Audi FIS World Cup titles.

Vonn is making another comeback after an injury at the 2013 World Championships in Austria took her out of action. She is expected back on the race course for speed events Dec. 5-7 at Lake Louise, Canada.

“It’s important for us to have a strong U.S. Ski Team as we host the World Championships in Vail/Beaver Creek this season,” said Patrick Riml, alpine director. “With Lindsey Vonn’s anticipated return, we will enter the season with six Olympic medalists. We’re also anxious to see the progress anticipated from younger team members this season. Opening with World Cups in Aspen and Beaver Creek will give us a chance to showcase our Team here in America leading up to the World Championships in February.”