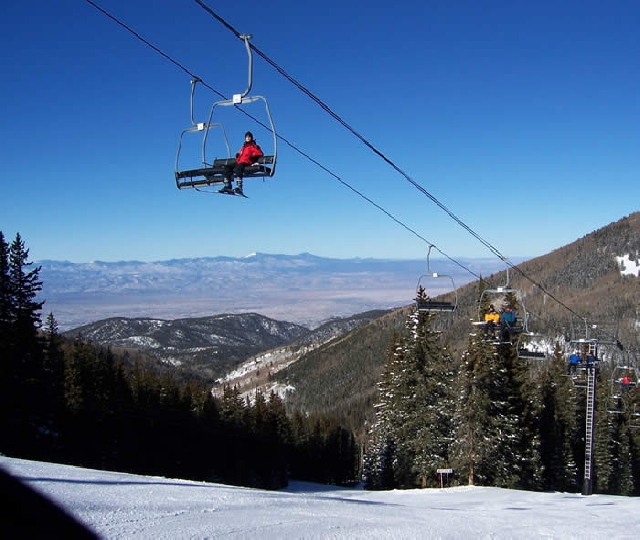 New Mexico may not be another country, but it’s definitely a world apart from the normal everyday skiing and riding found in the rest of these United States.

My trip began in Santa Fe, after driving west from Michigan over several days. If felt like entering another world upon arrival. The state capital, with its 400-year-old city plaza, is a low adobe-colored sprawl, many narrow one-way streets that you look up from and see the ski mountain of the same name rising above the landscape. You can drive up there in a half-hour of steady, roller-coaster curves, or take a local shuttle service. Don’t sit in the backseat if you’re prone to car sickness.

It’s not a huge area – 1,725 vertical feet, seven lifts and a magic carpet at Chipmunk Corner, and 77 runs spread out over 660 acres. From the base area, what you see is what you get, and that’s plenty. There’s something for all levels, from steep glades to well-groomed black and blue cruisers and wide boulevards for low intermediates and aggressive beginners, some from the very top of the 12,075 mountain. The base area at 10,350 feet is one of the highest in the country. From the top, the panorama spreads out below you; the epic sweep of the Rio Grande Valley, purple shadows of the Jemez Mountains southwest, the blunt mass of Sandia Peak to the south. Albuquerque, at its feet, seems almost visible, and the open plains, often dusted with snow this time of year, spread as far as the eye can see.

Ski Santa Fe, as the ski area is called, was developed by and still owned by the Benny Abruzzo family. They were skiers. Families feel at home here. The smaller size makes it easy to keep track of kids while letting them confidently explore the many runs. If you feel like brushing up on skills there’s a class for all ages and skill levels. The large sunny La Casa base lodge is open for breakfast and lunch and serves a delightful array of dishes; much better than your average ski-cafeteria food. 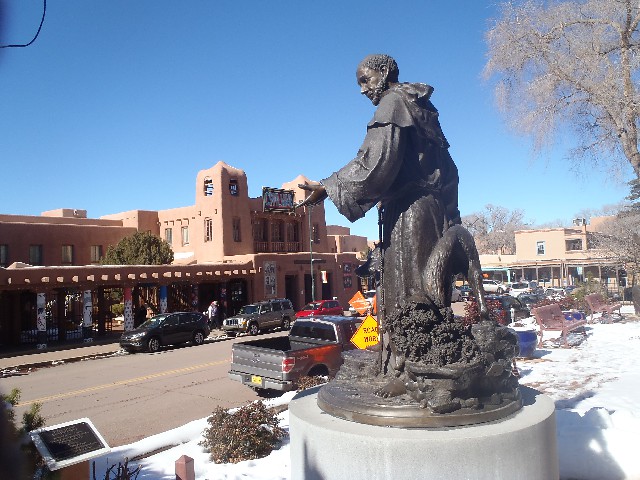 The ski area has no lodging, but with the city of Santa Fe located at the foot of the mountain, they don’t need it. By every measure of resort life – luxury and charm, dining and shopping, or just sheer beauty of the area – it offers as much as any other western destination. It’s the art capital of the southwest and a cultural vortex of remarkable energy for museums, art galleries, and outdoor sculptures. It’s the type of place where you should spend at least an afternoon strolling along the ancient streets visiting the many fine shops and museums. It’s the perfect combination for a family made up of some who like to ski a lot and some who don’t. Average highs this time of year can range from the high 40s to mid-50s.

I stayed in two hotels while visiting; the new, contemporary Drury Plaza Hotel, and the wonderful southwestern Hotel Chimayo Fe de Santa with its adobe appearance and Kiva-like fireplaces crackling inside. It also has an eclectic Low ‘n Slow Lowrider Bar serving locally distilled spirits. For dinner I recommend La Fonda on the Plaza and its signature restaurant La Plazuela and The Shed with a full menu of southwest dishes to whet your appetite. Santa Fe Restaurant Week takes place in early March. Check out Ski New Mexico for more information on skiing and riding in The Land of Enchantment.