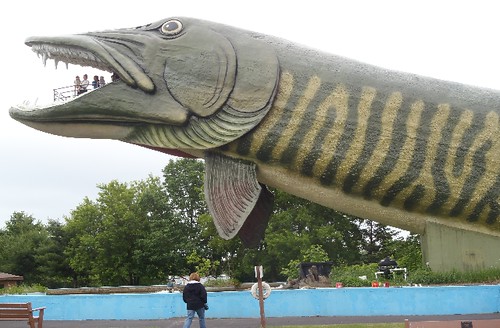 "Song of Hiawatha,” Wadsworth’s epic poem about life in forests along the western Great Lakes, came to mind during my visit to the Hayward/Cable area of northern Wisconsin.

The two colorful villages, located just miles apart, reflect the laid-back, woodsy atmosphere of the region. The area, an outdoor paradise, is dotted with numerous lakes and rivers and forests stretch further than the eye can see. Most lodging is located on or near a lake, except for Telemark Condominiums set in a beautiful open green area of slopes, trails and a golf course.

Restaurants reflect the “catch of the day,” often walleye, and if you like barbecue, don’t miss the original Famous Dave’s restaurant. There’s over 200 franchised around the country now, but this is where he honed all those barbeque flavors. An added bonus, Dave is often at the restaurant.

Where do you begin on outdoor activities?

It’s considered world-class fishing and the Musky Capital of the world. Cal Johnson’s record musky over five feet long and 67 pounds in weight is on display at the Moccasin Bar in Hayward, caught in 1948. The numerous lakes and rivers also provide for great family boating activity and swimming.

Ross’ Teal Lake Lodge in Hayward where my dog Tank and I spent a few nights in one of the peaceful lakeside cabins has pontoon boats that are available for guests to take out. You can fish or explore the larger islands, which have hiking trails. The lodge, now run by a fourth generation, offers wonderful breakfasts and dinners. They also have a challenging 18-hole golf course.

I was there to get in some mountain biking, hiking and ATV riding, and you can’t pick a better place in the Heartland or around the Great Lakes to indulge.

There’s over 300 miles of mapped and marked off-road biking trails. Much of it is single-track, and trails are rated for difficulty. The rolling glacial terrain provides great trails that connect the two villages. They will host the annual Chequamegon Fat Tire Festival Sept. 14. The event, which started in 1983, draws thousands of mountain biking enthusiasts to the area for a weekend of racing and riding. It’s one of the largest events in the Heartland.

In winter, they host the American Birkebeiner, North America’s largest cross country ski race, during February, which annually draws over 7,000 participants. It’s held on the same trail network, which is in tip-top shape year round. The New Moon Ski and Bike Shop in Hayward is an excellent and knowledgeable source for trail information.

For ATV’ing, the Sawyer County Snowmobile and ATV Alliance touts around 600 miles of groomed and cared for trails. Hayward Power Sports offers ATV rentals that you can take out on your own with a map or guided trail rides. The trail system is well marked with mileages. You can ride to Lake Superior and back for a day outing.

Allow time for a float down the scenic Namekagon River, a part of the St. Croix National Scenic Riverway. It’s considered one of the Badger State’s premier rivers for a float trip. Jack’s Canoe Rental near Cable will spot your car than send you down river on a delightful trip.

Hayward’s downtown is full of colorful and interesting shops reflecting the heritage and crafts of the area. It’s worth a walking tour, and don’t miss the National Freshwater Fishing Hall of Fame. Where else can you climb four-and-a-half stories into the gaping mouth of a musky for a view? Fred Scheer’s Lumberjack Show is both entertaining and historical.

Dinner In Cable at the Rivers Eatery is where you can enjoy some flavorful, unusual artisan stone oven pizzas and, for breakfast, don’t miss the walleye and scrambled eggs at Lakewood’s Resort. Another dinner spot you can’t beat for the combination of German food and view of Lake Namakagon from the dining room is at Garmisch USA Resort.