Trip Report: Finally Got To The Alps - 3 Weeks, 6 Cities, 7 Mountains 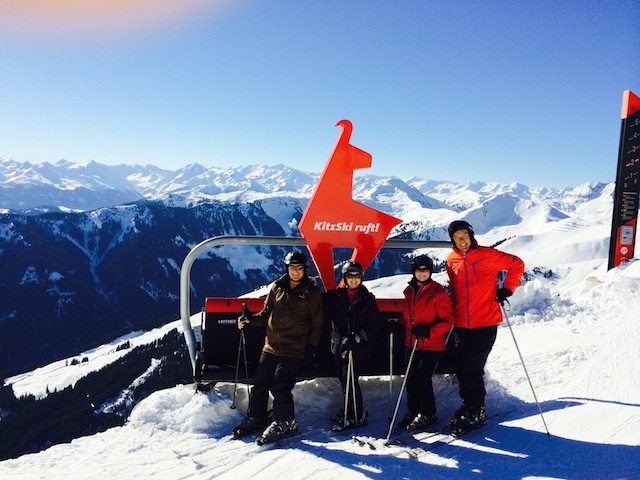 (Editor’s Note: California small business owner Ron Kemalyan has been a lifelong skier. His dream of skiing in the Alps came true this season. Here’s his report.)

My buddy Curt and I always wanted to ski in Europe. So we started planning our European ski adventure after a trip in 2013 to British Columbia. We talked to many people, looked at numerous websites and consulted with tour operators and decided to ski in Austria and Switzerland.

Curt and Lorylle Ketterer, Caroline Thompson and I mapped out a three-week trip, visited six cities and skied seven different mountains. We traveled solely by train and enjoyed that mode of travel immensely. A car wasn’t necessary and, besides, the four of us were traveling with eight pieces of luggage plus miscellaneous back packs, camera cases, purses, and hand carried items.

We flew out of Los Angeles International to Munich, Germany and spent two days seeing the sites – the BMW museum was a big highlight. A private tour with our guide, Simone, was informative and provided an historical perspective. No building taller than the tallest church spires added to the beauty of Munich.

From Munich to Kitzbuhel, Austria. The Hotel Resch was very hospitable and informative. From the town of Kitzbuhel, it looked like we were going to be skiing a small mountain. However, when we rode the gondola, we were awed by the size and beauty of this ski resort. There are 60 on-mountain restaurants, 820 snowmaking guns, 51 lifts, trams and gondolas and 170 km of groomed pistes.

The relatively low elevation also helped us ski harder without gasping for air. We skied about as far from our starting point as possible one afternoon and decided to take a bus back. There are excellent bus transportation options in the area and our ride confirmed our thoughts about the size of the ski terrain as it took us nearly 45 minutes to get back to our home base. We skied the obligatory Strief and had our own record times skiing the famous Hahnenkamm race course.

From Kitzbuhel to the home of Mozart.  We traveled again by train - about a 2 hour ride -  to Salzburg.  It is a delightful city that we self-toured, taking in the mighty Fortress and the Mozart museum plus numerous churches. We saw enough to want to return again some summer.

From Salzburg by train to Innsbruck. The Goldener Adler Hotel, a 450-year-old structure in the old city, was a great location. Some of the ski areas around Innsbruck are small and nearly all require a long bus ride. We particularly enjoyed the Stubaier Gletscher area, but it was very crowded and took an hour and a half after the one-hour bus ride to get on the mountain.  We skied four areas out of Innsbruck, but our best day was the day we adventured off to ski in the Arlberg.

The one-hour train ride to St Anton dropped us off at the base village. A short walk and we were on the mountain and, oh, what a mountain this is. We were amazed at how huge and beautiful the ski terrain is. We wished we had stayed in St. Anton instead of Innsbruck. Innsbruck was a great city to visit, but we wanted to ski, and spent too much time on a bus getting to and from the ski areas, though many of which are charming villages.

Then we were off to St Moritz. It was a beautiful five-hour train adventure. The train is an historic ride according to UNESCO.  An extra 5 swiss francs is well worth the cost of upgrading to a Panoramic Car.  What an awesome ride winding through the Swiss Alps.  St Moritz was everything we expected – very ritzy and expensive.  But hey, we can say we were seen in St. Moritz!

Everything except for skiing was expensive – especially food.  We acquired a three-day ski pass for $75 through our hotel. Since we left our skis at home (thank goodness we didn’t have four sets of skis to lug around along with our eight bags) we rented equipment at $50 per set per day.

We skied Corviglia and Corvatsch, two of the three mountains. Both were incredible. At Corvatsch, we skied our second glacier of the trip and had a great time skiing the 4,790 vertical feet it offered. We truly felt we were on top of the world here!

Our trip concluded with a visit to Zurich.  It’s a great walking city and we enjoyed the churches, university and the Steinway Piano Store.

2. If we had it to do again, we would  have stayed at Kitzbuhel and St. Anton taking a day trip to Innsbruck, which is a little too far from the slopes.

3. We had some good meals, but for the most part,  the food is expensive and the fare is far from being light. We had plenty of weiner schnitzel. We ate Fondue in Switzerland at a cost of slightly more than a Big Mac, which runs about US$14 in Zurich.

4. Yodeling for change on street corners can cut the cost of the trip.

5. Switzerland is not in the EU… remember that when applying for your Tax Refund Stamp.

6. The week of Lent is Carnival Week – i.e., Fat Tuesday in New Orleans. The one thing we did not anticipate was how crowded the ski slopes were. Checking on school schedules might have made us plan our trip a little earlier.  But, Carnival in Innsbruck was an unexpected fun time.

7. Remember to order tap water in restaurants or you will get charged for your water – with or without gas.

8. Each of our hotels offered excellent dining options.

The Austrians and Swiss were very hospitable.  They were always willing to help us whether it be getting directions or making reservations.  We were so impressed with the skiing and the hospitality that we are already talking about return trips.