The Snurfer Is Back; Vermont Firm Re-Introduces Snowboard Prequel 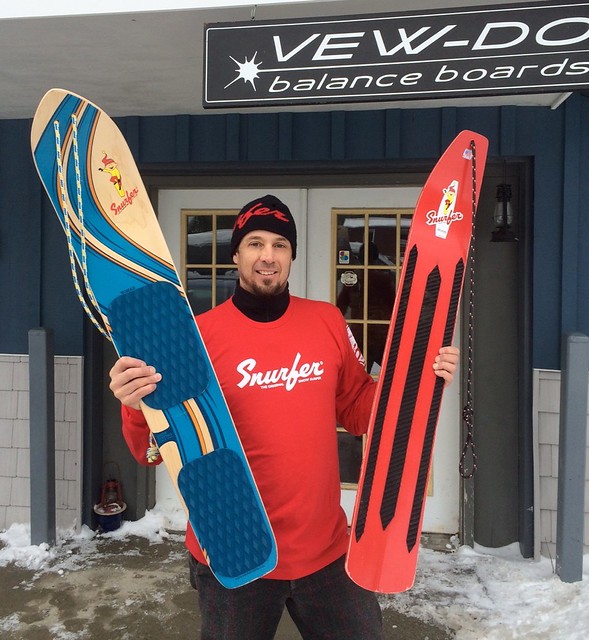 The Snurfer, a precursor to the snowboard, has been revived by Vermont's Brew Moscarello for low-tech, back-to-basics backyard fun.

The simple wood board (no metal edges) with a rope on the front was first used for stand-up snow sliding in the 1960s. It proved popular with over a million sold.

When the snowboard took off, the Snurfer disappeared.

So why is Brew Moscarello circling back to a board that’s primitive by today’s standards?

“The Snurfer is great backyard fun and a return to snowboarding’s roots,” Moscarello told SnoCountry.com.

“Our [Vew-Do] balance boards have their roots in snowboarding, and with balance being a key part of riding a Snurfer, it makes sense for us to bring this icon back.

“It’s made in the U.S. of native Wisconsin hard maple veneers, doesn’t require batteries, and is relatively inexpensive,” Moscarello added.

Started As A Lark

What had started as a lark in 1965 when Sherman Poppen lashed two skis together for his daughters to ride down a local hill became a commercial success story when he developed a single board that was shorter and wider than a traditional ski and equipped it with a rope for steering.

By shifting weight on the back foot, the rider was able to “steer” the board while holding on to the rope. No bindings, edges, or special boots required, just a sense of adventure to “surf” on snow. Poppen patented his “Surf-Type Snow Ski” in 1966.

The name Snurfer came from his wife’s suggestion to combine surf with snow.

Jake Burton Carpenter was in ninth grade when he first began bombing hills on Snurfers. Using a widened board to install bindings, he tried out his first snowboard in 1975. Eventually, he added edges and using high tech materials was instrumental in launching the snowboard industry.

Brew Moscarello, a snowboard instructor who went to work for Burton Snowboards in the late 1980s, was “fooling around” on his Bongo Board (a 1960s-era balance trainer) when it struck him that he could build a balance board for snowboarders. 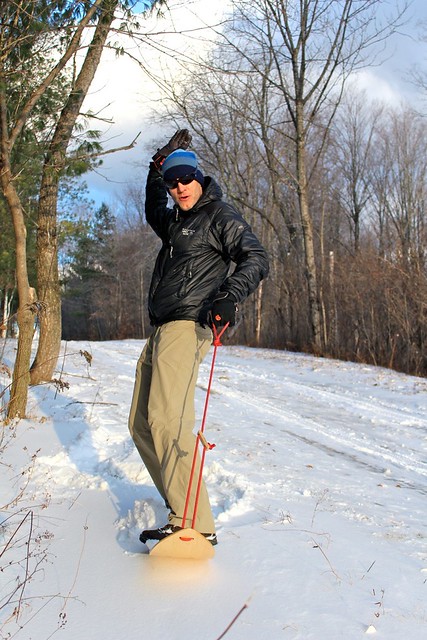 “I saw need to teach people balance before getting on snow and realized my bongo board was archaic. So we took a somewhat prehistoric design and made it contemporary," Moscarello says. Our reshaped roller allowed moving in all directions instead of just going side to side. This added toe and heel motion for full rotational balance training."

Since his first patented Vew-do Balance Board in 1992, he’s designed more models, including the new NUB to address the balance training needs for any ability or age level.

“It’s only a half-inch off the ground and has no moving parts. My 80-year old mom uses it and my 10-year old son does ollies and kick-slips with it,” he said.

The simplicity in its design carried over to the idea of reviving the Snurfer when Moscarello saw the backcountry movement take hold. Climbing hills was becoming popular at the same time snowboards sales were beginning to slow.

With Poppen’s approval, Moscarello put his passion for snow fun to work and has produced two models. The Classic [$119.95 in red or yellow] is a near exact replica of the original Snurfer with the exception that the staples were removed for the foot grip and replaced by modern EVA foam.

The contemporary Nomad model [$139.95] has a flat-bottomed dual-channel base and a wider nose width, making it suitable for various snow conditions and ability levels.

Sales have been good.

“Nostalgia doesn’t hurt — it’s actually been a wonderful component in the response of the public. We sold out before Christmas and revamped production,” Moscarello added.

Snurfers can be purchased online and in shops around the country where they bring smiles to those recalling their own backyard fun. 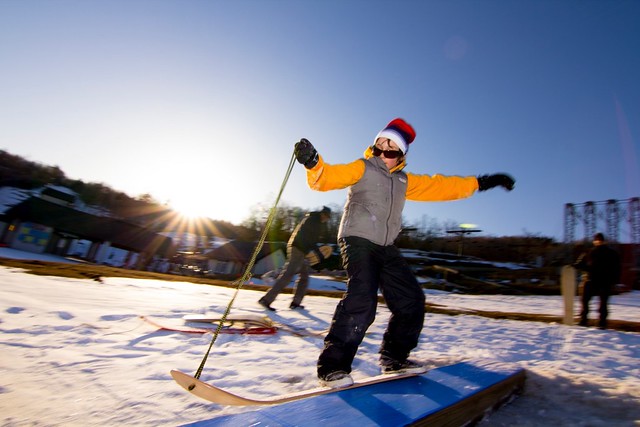