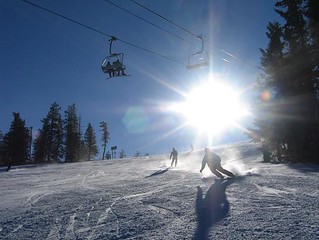 The Heartland’s tallest ski area, Terry Peak in the Black Hills of South Dakota, continues to slowly move ahead with the Wharf Expansion Project, a partnership with Gold Corp the owner of Wharf Gold Mine that sits just below Inferno.

The first phase of the expansion is done, which included the new high-speed quad chairlift dubbed the Gold Corp Express that serves Little Hope, Empress, Homestake and Hobo Queen.

It also included upgraded snowmaking and an improved access road. The second phase is supposed to kick in this season that means a halt to mining this winter. In 2017 they are supposed to extend the above named runs on down the mountain into the mining area, which will be deeded to the ski area. That will drop those runs another 300 vertical feet, which will give Terry Peak a large 1,400-foot vertical drop.

It may be on the western edge of the Heartland, but it’s still the Midwest. The Peak is offering its season pass at half-price through Friday, Oct. 31. The price is $299, and it goes up to nearly $600 Nov. 1.

The Deadwood CVB is offering a Black Hills Stay and Ski Package that starts at $179 per person/double occupancy and includes two nights lodging and skiing plus gaming and entertainment coupons. It's available January through March.

Terry Peak currently offers a 1,100-foot vertical drop, over 30 runs – some up to two miles long – four chairlifts (including three high-speed quads), a halfpipe and freestyle terrain park.  It offers skiing and boarding for all levels, and even expert glades to test your skiing mettle.

The Black Hills, 7,200 feet above sea level, have the highest peaks between the Rockies and Europe’s Alps; higher than any mountain range along the east coast.  It's also a lot less expensive than a trip to the Rocky Mountains or the Alps for Heartlanders, especially those in Minnesota, Iowa and Wisconsin.