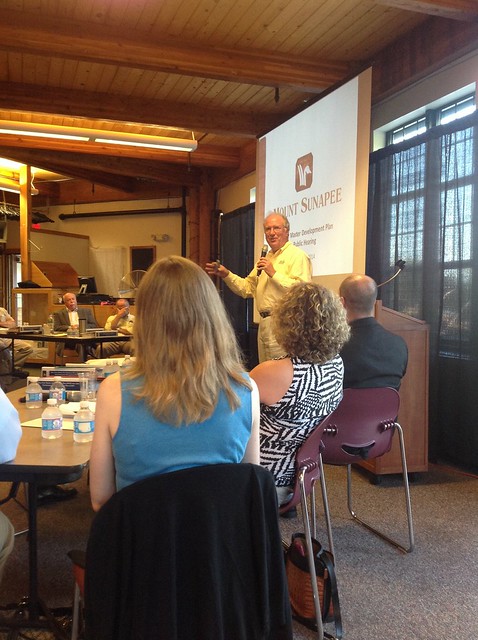 The goal was to solicit public comment on the resort's Master Development Plan (MDP) and Environmental Management Plan 2015-2019 for the ski area at Mount Sunapee State Park. A key part of the expansion is into West Bowl.

An overwhelming majority of the nearly 35 people who spoke in the public comment portion of the meeting were in favor of the expansion.

An example: “Tim and Diane Meuller have reversed the financial losses, turned Mount Sunapee into a money maker for the state,” said Newport resident Frank McConnell, owner of Bob Skinner Ski and Sport. “Reinvesting in Mount Sunapee now would mean more revenue for all the business like mine that thrive on many of the thousands of visitors who come here to this area to enjoy all that our beautiful region has to offer. Tim and Diane Mueller have always done the responsible thing. When responsible owners do responsible improvements and expansions, it is good for everyone.”

Many echoed these sentiments that Mount Sunapee is a positive economic and recreational force in the region, and that the expansion is critical in remaining a competitive option in the state’s ski resort industry.

Opponents of the expansion contend that the new trail system would allow for commercial real estate development to take place on that privately held land that abuts the state park.

Will Abbott, policy and preservation stewardship vice president at the Society for the Protection of New Hampshire Forests, was one of the few who voiced concern over the expansion.

“If the Meullers want to retain ownership and build a slopeside residential development, then plug this development into the existing ski lease from the state, we argue this would be problematic. The state cannot use public land to create exclusive rights or benefits for a privileged few that other citizens of the state cannot have access to.”

The state of New Hampshire has owned the 656 acres that make up Mount Sunapee Ski area and State Park since 1948. The Muellers entered into a 40-year lease of Mount Sunapee in 1998. The lessees are required to submit a Master Development Plan (MDP) to DRED every five years for the term of the agreement.

The Muellers have invested almost 21 million dollars into improvements to the ski area since 1998 and the annual payroll had increased from $960,000 per year to almost $4 million last year.

The New Hampshire Superior Court ruled in June in favor of Sunapee’s long-standing claim that the leasehold boundary for operating the ski area is the same as the state park’s north and west boundaries and that now the opportunity to expand skiing and riding into the West Bowl is able to be considered by the operators of Mount Sunapee Resort.

DRED Commissioner Rose said he planned to release a statement with draft comments “after we get public input and talking with the Mount Sunapee advisory committee. I would like this to be as open and as transparent a process as possible.” He said the state would accept public comments until Sept. 26 at the New Hampshire Division of Parks and recreation website or by email to MountSunapeeComments@dred.nh.gov.

Gamble explained that the MDP outlines projects that are new to the MDP. Chairlift, snowmaking and base lodge upgrades had been approved in previous MDPs. Improvements not previously approved in the 2015-2019 MDP are the West Bowl expansion, upgrade of the Sunapee Express Quad to a six-passenger express chairlift and installation of a Mountain Coaster in the woods between the Lynx trail and the Hansen-Chase ski trail.

The West Bowl expansion would take place on the top part of the 175 acres that had been in contention as well 650 acres that owners Tim and Diane Meuller have purchased, mostly in the towns of Goshen and Newbury.