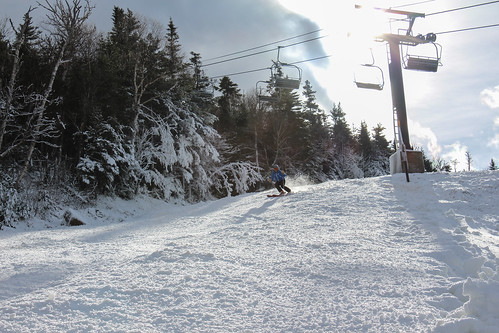 Sugarloaf started the morning’s run with five trails open, including Tote Road and Kings Landing, thanks to favorable temperatures, six inches of new snow, and an upgraded fleet of energy-efficient snowmaking equipment.

This year's early opening at Sugarloaf is thanks in part to an investment of more than $2 million in new snowmaking technology over the past three years, which has added nearly 600 new low-energy snowguns to the fleet of snowmaking equipment.

The new gear has allowed the resort to make more snow than ever before, while simultaneously reducing their associated energy use by 20 percent. These new snowguns now make up 90 percent of the snowmaking fleet.

The resort shut down on Monday for the mid-week stretch before reopening this weekend (Nov.15-16). Daily operations will begin on Friday, Nov. 21st.

Wildcat Mountain was the first New Hampshire area to operate its lifts this season, opening the Wildcat Express Summit Quad chairlift at 10 a.m. Sunday. With top-to-bottom skiing and riding via the Lynx trail offering well over 2,000 feet of vertical, Wildcat contends it was offering the most open vertical terrain among all ski areas currently open in the United States.

"We hosted over 300 happy skiers and riders opening day, which was a decent turnout considering that we made the call just the night before to open," Wildcat's Thomas Prindle told SnoCountry.com.

Lift tickets were free to skiers and riders who provided canned good food items or a small cash donation, with the collection going to Feed Hope Food Pantry in Berlin, N.H. Prindle reported the resort collected 10 cases of canned food and more than $392 in donations for the food pantry.

Having recently completed the largest snowmaking upgrade project in Wildcat's history, snowmakers have been very productive making snow at higher elevations whenever temperatures were favorable beginning in late October. But it was only just this past Friday night in to Saturday afternoon that temperatures were favorable at Wildcat's base elevations allowing snowmaking crews to complete the top-to-bottom coverage the Lynx trail needed for it to be open.

With temperatures expected to warm up again through the early and middle part of this week, Wildcat will postpone operations until Friday, conditions permitting, once colder temperatures return and snowmaking can resume.

On the other side of Mt. Washington, Bretton Woods also opened on Sunday, just two hours after Wildcat. Skiers and riders who brought a non-perishable food item got their first turns for the season for free on Rangeview trail under the Zephyr quad. Bretton Woods plans to reopen on Thursday.

Bretton Woods also credits early opening ability to the more than $2 million in capital improvements to its snowmaking system over the past three years. The new equipment will enable the ski area to continue the tradition of aggressive, early-season snowmaking across 300 of its 464 acres.

Photo: Wildcat first to open in New Hampshire for the 2014-2015 season. (Wildcat Mountain)