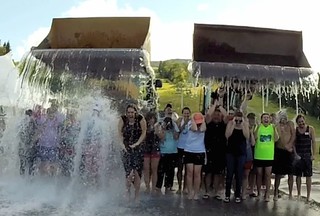 Stratton Mountain has answered the Ice Bucket Challenge to raise awareness and funds for the ALS Association of Northern New England. ALS, also known as Lou Gehrig’s Disease, is a neurodegenerative disease that causes degeneration in the spinal cord and brain.

Two loader buckets of ice water were dropped on 35 employees, representing every department. The loaders were filled with water from a fire hose and several large buckets of ice in front of the Base Lodge Aug. 14.

“I feel very strongly about giving back to the large community and knew that challenging the resort as a whole would be a great opportunity for the Stratton family to come together to support this cause,” says Stratton’s Digital Marketing Manager Rob Chrostowski who nominated the resort.

Stratton, in turn, has challenged neighboring resorts Bromley Mountain, Magic Mountain and Mount Snow, as well as one of their sister resorts, Snowshoe Mountain in W.Va. to accept the challenge. Stratton was one of the first resorts in the East to take on the Ice Bucket Challenge to Strike Out ALS, according to the resort.

In addition to taking the video challenge, the resort made a donation to the ALS Association of Northern New England.