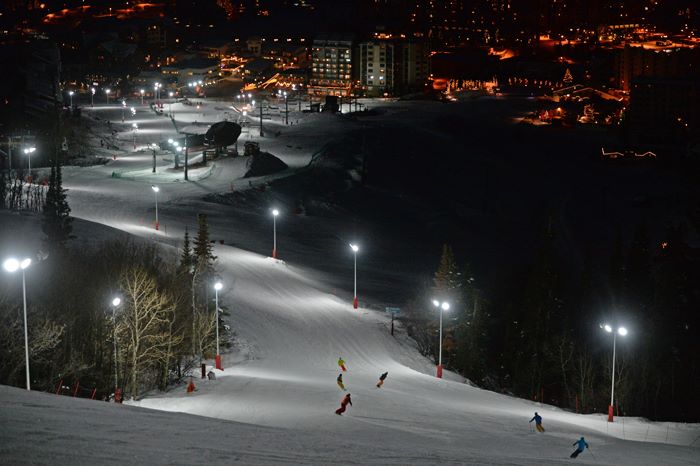 Officials at Steamboat say that their experiment last season with after-hours skiing and riding was a success – enough so that they’ve added a couple of evenings to the nightly schedule.

This season, skiers and ‘boarders who haven’t gotten their fill can keep their equipment strapped on Thursday through Monday for some night skiing and riding at the northern Colorado resort. Last season, which was the first where trails off the Christie Peak Express were illuminated after hours, the lights went on Thursday-Saturday.

One reason for initiating night skiing and riding – the third such offering in Colorado – was to revitalize commerce around the base area, which Steamboat has spend $6 million on improvements in recent years.

“Night skiing was extremely popular and met with a wide interest,” Steamboat’s Mike Lane told SnoCountry.com. “The base area was more active with skiing and riding going on.  All around, more energy flowed.”

The switch for Steamboat’s high-tech lighting system will be first thrown on at 5:30 p.m. Dec. 12 and Dec. 13. After that, the resort will go to its Thursday-Monday, 5:30-8:30 p.m. schedule until Feb. 20 – with everyight skiing every-night during the Christmas holiday. From then to the end of the season, the hours will shift to 6-9 p.m. Resort officials have reserved the right to adjust times and evenings during holiday or special-event times.

“The lighting surprised a lot of people when they see how sophisticated it has become,” Doug Allen, vice president of mountain operations told SnoCountry.com. “This isn’t the traditional night skiing experience we all grew up with decades ago, but one that truly has become a key component mountain base village.”

The six-seat Christie Peak Express lifts skiers and riders 1,100 vertical feet off the Steamboat base area. Four runs – Stiz, See Me, Vogue, Stampede – will be groomed and ready, as well as the Lil’ Rodeo terrain park that added an intermediate, stair-step feature over the summer.

Walk-up tickets cost $35, advance purchase $25, for adults. Teens cost $25/$15, and kids under pays $15/$10. Another benefit is free night skiing on the day of arrival for all visitors who flew to Colorado for a Steamboat vacation. A boarding pass gets them on the hill.

“We saw folks who arrived later in the afternoon, go night skiing as way to warm up and get ready for their first day on the slopes,” said Lane.

More posts from author
Monday, 19 September 2022 Sign A Liability Waiver, Get A Discount Day Ticket At Mt. Bachelor
Monday, 12 September 2022 The Brilliance Of Aspen Groves Beckons From Colorado's Mountains
Sunday, 04 September 2022 Multi-Mountain Passes Line Up For 2022-2023 In The West