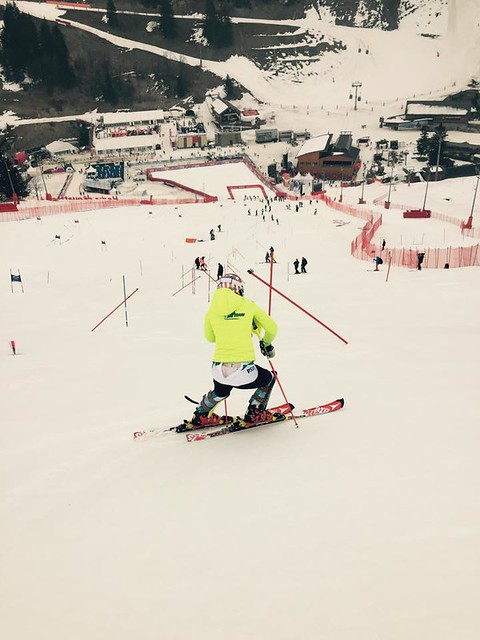 The storyline of the World Cup Finals Week so far has been the dominance of the USA's Lindsey Vonn coming back from severe injuries and winning the Crystal Globe (season title) in both downhill and super-G. But, suddenly, the spotlight shifted Saturday to Mikeala Shiffrin from Eagle-Vail, Colo.

Shiffrin made it a slalom three-peat in Meribel, France as she earned her third straight Golden Globe in the slalom, topping Sweden’s Frida Hansdotter for bragging rights.

Shiffrin entered Saturday's race with a healthy 90-point lead, meaning she basically only needed to cross the finish line to grab the title. But Hansdotter put up a good fight as she led Shiffrin by 0.07 seconds after the first run and ended up finishing in second place in the race behind the American, only 0.05 seconds off the pace. It was Shiffrin’s fifth slalom victory this season.

“Frida has been pushing me hard all season, she’s been skiing so fast and I really had to give it my all in the second run to get the win today,” said Shiffrin after the race. “When I hit the flat section I had a good feeling, but knew I had to give it everything I had if I wanted to win and luckily it worked out.”

Shiffrin ended up winning the slalom globe by a 110-point margin ahead of Hansdotter, while Tina Maze (SLO) finished well behind the two-horse race ending 240 points behind in third place.

The Audi FIS World Cup 2014/15 season will come to a close Sunday when the men race the slalom, while the ladies’ wrap-up their season with a giant slalom in Meribel.

Marcel Hirscher earned a Crystal Globe today in the giant slalom at the Audi FIS World Cup Season Finals in Meribel (FRA), although he might have been hoping to take home its bigger brother as well. Hirscher already had the giant slalom globe secured entering today’s race and had the chance to also wrap up the Overall Title, but Kjetil Jansrud (NOR) kept his hopes alive to challenge for the big globe after skiing to an 11th-place finish thanks to strong second run.

"It is an unbelievable moment. Ted (Ligety) has been dominating the GS for the last few years and it was a long wait to get closer to him so for me it is very satisfying today," said Hirscher of winning the giant slalom globe. Legit finished sixth Saturday.

The last day of the World Cup Finals saw Lindsey Vonn finish fifth in the race, gaining a third place in the final standings, while Mikaela Shiffrin finished seventh. The pair posed for photographers after the race with their three Crystal Globes won during the Meribel week. Anna Fenninger of Austria won the down to the wire finish for the World Cup overall title by edging out Slovenia's Tina Maze. The men's slalom was a washout for Americans with Austrian Marcel Hirscher taking the win and the Crystal Globe for the overall season win.