South American Ski Resorts Gear Up For Upside Down Season 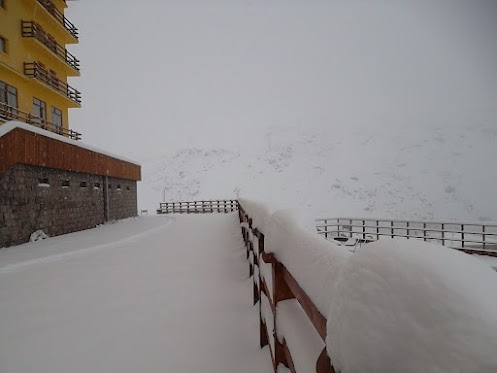 The endless ski season takes its annual Down Under turn while we settle in on mountain bikes and golf courses. But, you can keep the ski/ride itch scratched this summer at improved resorts. The photo was taken at Valle Nevado April 27, 2012. All bodes well.

The resort with the largest skiable terrain in South America is Valle Nevado, Chile, which has added that country’s first gondola. It’s a six-passenger ride with 70 cars. The gondola complements the Andes Express quad chair, the fastest lift in the region.

The resort is in the midst of a 10-year $150 million development program that has already seen a new 500 car parking area, facility for ticket sales, equipment rentals, and a restaurant, and a sports and entertainment center with a climbing wall and skate ramp.

You can head over the hill from Valle Nevado to Chile’s El Colorado. That resort has paved the way for four new apartment buildings by adding a new water treatment plant, There’s a new draglift, with a capacity of 1,400 skiers per hour. That opens up the terrain in the Valle Olimpico and its 12 new runs and off-piste skiing and riding.

It’s a Golden Anniversary celebration at La Parva, where the first half-pipe training center in South America is ready for action. It is accessible by a new triple chair that also opens up five new pistes.

A smaller resort, Corralco, on the flanks of he Lonquimay Volcano, has just built a new $7 million, 66-room hotel and spa. Access has been improved by road sealing.

Shifting over to Argentina, Las Leñas Resort where a new quad chair will move 2,100 people per hour. Its sister resort, Villarica, also on a volcano, has completed a similar new paving project for access.

Want more good news if you are planning a flight south? The Meteorological Office of Chile is reporting that La Niña, the culprit responsible for lower precip levels the past few years, “is in its final stages.” The model suggests “completely normal levels of precipitation across the country. Book your summer skiing now, as SERNATUR (Servicio Nacional de Turismo Chile), is predicting “the greatest influx of foreign visitors on record.

Best bet is flying into Santiago that has direct flights from Miami, Dallas, New York, Los Angeles, and San Francisco (the latter two may have a stopover in Lima, Peru). The modern Santiago International Airport is served by more than 20 international and domestic airlines.

U.S. and Canadian visitors do not suffer from long jet lag, as Santiago is on New York time.  PowderQuest is an agency that offers a variety of trips to Chile using certified guides from July through October. The company has offices in the U.S. and Chile.

Stick with SnoCountry.com all summer long for news and snow conditions at resorts in the Southern Hemisphere.