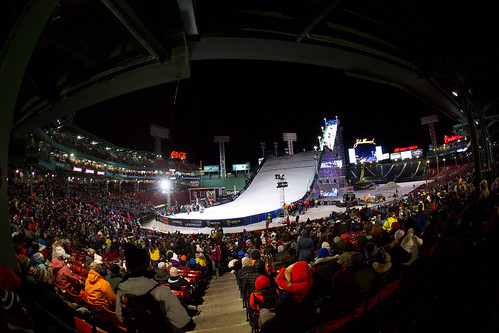 The Green Monster wasn’t the biggest thing towering over Boston’s Fenway Park in Boston Thursday night. Top snowboarders from around the world got a chance to huck it from a 140-foot high scaffold ramp that sent them careening into the cold night air over the iconic ballpark in an historic first-ever event at Polartec Big Air Fenway.

Ten men and six women reached the finals for the FIS Snowboard World Cup event. Each got a chance to show off their stuff, required to perform three different tricks and land at least two of them.

Despite the temperature in the low teens and 24 mph winds, an electric crowd of 11,786 bundled up and filled the viewing areas of the stadium. In keeping with tradition, a representative of Polartec threw out the ceremonial first snowball pitch to Wally the Green Monster over the lines of home plate painted red in the snow.

Taking night skiing to the next level, lights lined the snow-covered ramp that illuminated the talent flying through the air. Rather than peanuts and popcorn, vendors hawked hot chocolate in the stands.

Bringing an event that is usually only found on mountain slopes to the city is an opportunity to introduce up and coming stars, many in their early twenties, to Boston.

Now from Truckee, Laconia, NH, native Chas Guldemond played to the crowd as, like Babe Ruth, he “called his shot” before launching his third run to take third place overall behind Canadians Max Parrot and Michael Ciccarelli.

“Fenway totally went off like we expected it to, the crowd was really behind me which made my experience amazing and to land three runs and call my shot on the last one and send it to the bottom, that topped off my night,” Guldemond said.

In a surprise breakthrough, rookie Julia Marino of Westport, CT, topped the women’s field in her first-ever scaffolding jump competition. Marino wasn’t originally even scheduled to compete - she snuck in off the alternate list when her teammate Ty Walker (Stowe, VT) was forced to drop after being injured in practice.

“I’ve never snowboarded at a contest with a crowd this big – it’s amazing!” she said. “I thought it would make me more nervous but it actually made it way more fun. Every time I landed a trick it was so cool to hear the whole crowd going wild. There were so many people here - I didn’t think that this many people would show up for a snowboarding event; it’s amazing to see all these awesome fans out here supporting what we do.”

The electricity of joining thousands of your closest friends in the park lent a party atmosphere as the pound of the music and the announcer’s bold voice boomed through the stadium. Fans held a collective breath as each boarder careened down the slope towards the jump and flew into the air, watching in awe in hopes for a clean landing.

Whether fans are die-hard skiers and riders or newcomers getting a glimpse of the spectacle, the event offers a taste of the adrenaline the athletes feel.

Up next at Fenway, the freeskiers compete Friday night. 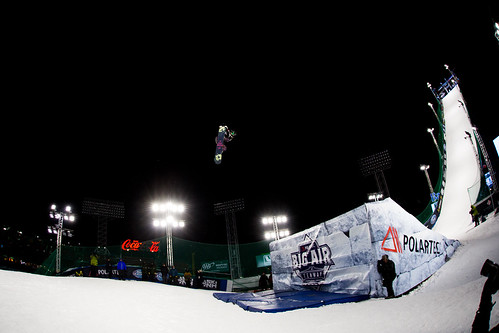