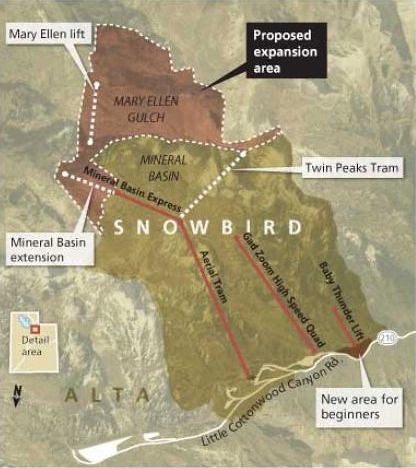 Officials at Snowbird Ski & Summer Resort have asked for permission to expand into neighboring American Fork Basin for both winter and summer activities.

Resort officials currently are asking for Utah County approval for construction permits. Encompassing more than 500 acres at the head of the basin, known as Mary Ellen Gulch, the land is privately owned by Snowbird, which has eyed expansion over the American Fork ridge to the north for years. Slopes in the gulch primarily face to the east.

All access will come from the existing Snowbird side of the resort, either off the ridge above Mineral Basin or via lift. Plans call for a new lift (of undetermined type) into the upper bowls of the gulch, plus the extension of the Mineral Basin chairlift in order get skiers and riders back to the main Snowbird area.

The area has long been a backcountry destination for skiers, snowboarders, hikers and mountain bikers. It sits in the midst of U.S. Forest Service lands, accessible via Forest Service 4x4 roads or hiking/biking trails from the south.

For summer activities, the resort has plans for a zipline, plus hiking and biking trails.

In public statements, Snowbird’s Brian Brown characterized the project as “one of the most celebrated expansions in Snowbird's history.”

“No plans whatsoever for any sort of hotels or condominium developments,” Brown said.

The American Fork expansion is part of a 2011 master plan approved by the Forest Service for Snowbird. It includes an east-west running second tramway from Hidden Peak (the top of the main tram) to the West Peak of the American Fork Twin Peaks, more beginner terrain near the base and night skiing off of Gadzoom lift. The projects come as Snowbird enters its second season under ownership by the Cummings family, former owners of Park City Resort. 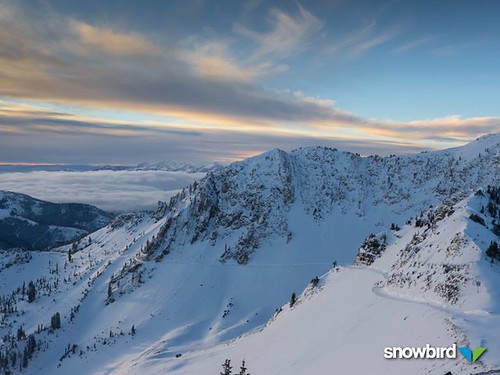