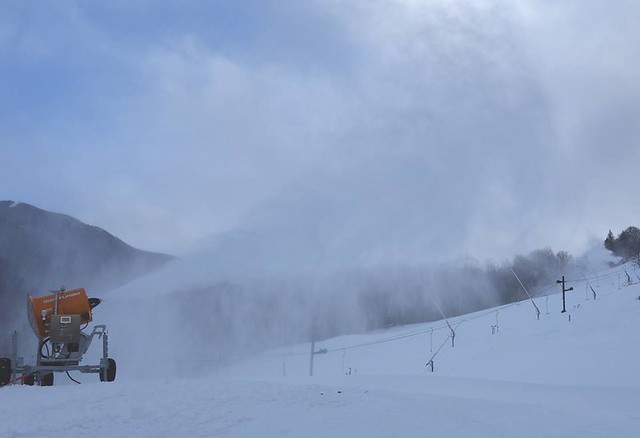 Dropping temperatures were a factor in fighting the fire in the building located along route 108 below the base lodge. Roads had to be treated before fire crews could access the area. Although the building was a total loss, no injuries were reported.

Some snowmaking valves needed to be replaced as a result of the fire. “There was an interruption to snowmaking for about 48 hours for some repairs. Since, our guns have been running around the clock, taking advantage of the cold temperatures, and the trail count has nearly doubled,” Smugglers’ Notch’s Karen Boushie told SnoCountry.com.

Boushie reported that the building is already in the process of being replaced, with a platform already completed. The cause has of the fire not yet been determined.

The addition of 156 new high efficiency tower guns and one additional fan gun signaled the completion of Smugglers’ conversion to a fleet comprised fully of high efficiency snowguns this year. This will be Smugglers’ third consecutive winter of snowmaking improvements. Some 250 new guns were incorporated into the fleet over the previous two winter seasons. The high efficiency guns yield faster terrain coverage and quick refreshing of trails for the best possible onslope experience. More snow can be made at a wider temperature range, improving early and late season coverage with greatly reduced energy costs.

These snowmaking additions are part of a comprehensive effort to enhance Smugglers' snowmaking product for skiers and riders. Work has begun on a new pipeline for water access to support an expansion in snowmaking coverage from the current 60 percent to 80 percent coverage. That expansion will take place over the next three seasons. The pipeline project will increase conservation flows at the resort's existing withdrawals. The pipeline project is expected to cost about $3 million and be completed in Fall 2015.

Photo: Despite a fire in a snowmaking utility building, Smuggs has nearly doubled their trail count in the past week. (Smugglers' Notch Resort/Facebook)