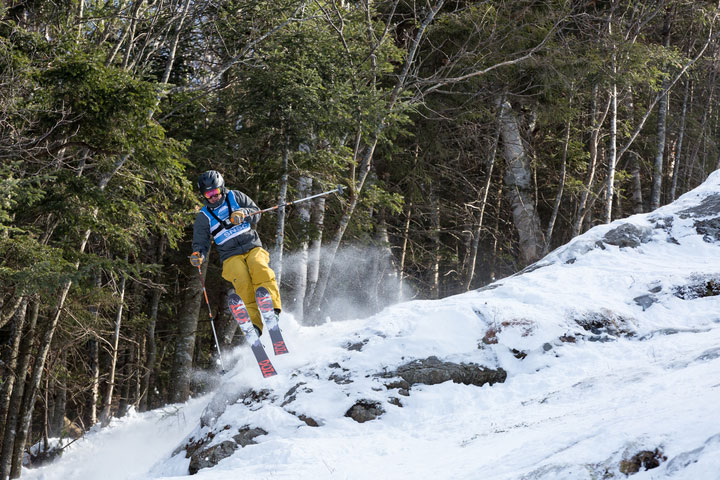 Freeskiers will take on the double-black-diamond Madonna Liftline, the most challenging lift-accessed terrain at Smugglers’ in the open Extreme Skiing Challenge freeskiing competition at Smugglers’ Notch March 8. Now in its third year, competitors will be judged on line, control, fluidity, technique and style.

The Smugglers' Notch Ski and Snowboard Club hosts the Challenge – an opportunity for junior and adult freeskiers to show their stuff on some of the most difficult terrain Smugglers' Notch has to offer.

The course is planned for the Madonna headwall, an ungroomed double black steep with a double fall line descent filled with cliffs, bumps, trees, chutes, and stumps.

“The challenge is definitely a spectator-friendly event. As the competitors run the course on the headwall from just below Catwalk to just above Madonna midstation, the best seats in the house for watching will be on the Madonna summit lift,” Smuggler’s Karen Boushie told SnoCountry.com. “Spectators also can view from a roped off area at the Red Fox Glades near the finish area at the base of the Madonna headwall, easily accessed from midstation.”

There is a $45 entry fee (includes t-shirt) and a $39 lift ticket available for competitors. The field will be capped at 100 competitors. This is the first year the event has been International Freeskiers & Snowboarders Association (IFS) and Free World Qualifier (FWQ) sanctioned. There are 18 spots available at registration Sunday morning at 7 a.m

The purse for the winners includes $2,000 for open competition, plus skis, gear and swag bags for top finishers. If snow conditions permit, there will be one inspection on course. Four judges will rank one competition run on full natural snow terrain. Competitors face several cliff jump opportunities, two mandatory drops, ice, rocks, roots, and stumps.

Salatino added, “The populatity of big mountain competitions is picking up fast. Last spring, the club worked really hard to get IFS to expand into the East, and for the first year now we have eleven competitons under the IFSA umbrella, which puts us on the national map. That was an effort by the Ski the East folks, myself, the UVM freeskiing team to make it come together this year.”