Ski Brule Offers Ski/Lodging Deals For Next Season; Act By May 15

While most ski resorts are still pushing early season pass deals for the 2012/13 season, Ski Brule, in Michigan's UP, is already touting lift ticket and lodging deals for next season.

Purchase five packs of lift tickets for $130 Through May 15, 2012 and you will receive a sixth lift ticket free. That's slightly more than $21 per ticket, which is a $122 savings over purchasing six lift tickets next season at $42 each. You can also purchase individual lift tickets for $26 each through the same date.

As Midwest skiers and riders have learned in past years, a Brule season pass is a wise investment. You can count on plenty of time to use it. They normally post the longest snow sports season in the Heartland.

The resort stayed open 182 days during the 2005/06 season, which is the record for longest season mid-continent. The area normally opens in early November and stays open well into April. 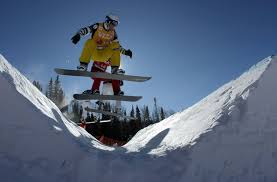 Ski Brule offers a variety of terrain - slopes, terrain parks, terrain trails and half pipes - that flows off a 500-foot ridge. Many of the trails are sequestered in trees keeping them separate from the wide, boulevard-like slopes, which are often busy on weekends.

This is Olympian Nick Baumgartner's home hill, and he often shows up when not competing internationally to ride with guests. The 30-year-old X-Games gold medalist is from nearby Iron Mountain, Mich.

The area has often been ranked as a "family favorite" among Midwest skiers.