Show Off Your Helmet Head At Okemo, Elsewhere -- It's National Safety Awareness Month 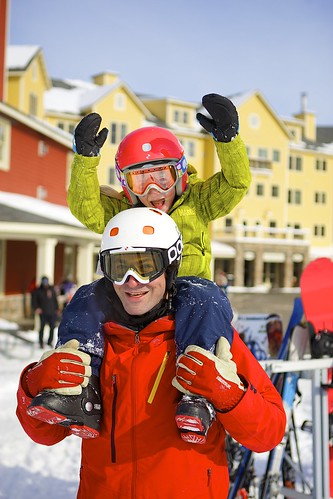 Okemo is one of many resorts across Vermont that participate every year in the National Ski Areas Association’s (NSAA) sponsored National Safety Awareness Month to educate skiers and snowboarders about being safe, and to use common sense on the slopes.

In January, Vermont resorts and others throughout the country host a variety of events and contests including scavenger hunts, helmet head contests, raffles, films and more.

Okemo commemorates the event by hosting Vermont’s own PHAT team (Protect Your Head at All Times) from 10 a.m. to 1 p.m., Monday, Jan. 18. The Vermont Snow Sports Research Team, a partnership of Vermont Children's Hospital at Fletcher Allen Health Care and the University of Vermont College of Medicine will be on location to help educate skiers and riders about helmet use.

“After seeing many head injuries in the ER, a husband and wife team got grants and created an organization to monitor helmet use,” Okemo’s Bonnie MacPherson told SnoCountry.com. “Now they join us every year for Safety Awareness Month to promote head safety with raffles, stickers and swag.”

Their Helmet Head contest celebrates that cool, disheveled look of matted hair that happens when a skier or snowboarder removes his helmet after a great day on the slopes.

Sunday, Jan. 24, Okemo’s photo team will be out and about in search of the best Helmet Head. “Teams of photographers head out to ask guests to remove their helmets for a picture of their crazy hair, and then we post them on social media and let the public vote for the best one,” MacPherson told us.

She added, “We’ll also have safety ambassadors out on the hill interacting with guests, giving out hot chocolate coupons if they Know the Code or Smart Style."

Photo: Elwyn Webb shows off his Helmet Head at The Jackson Gore Inn at Okemo. (Okemo/Facebook)