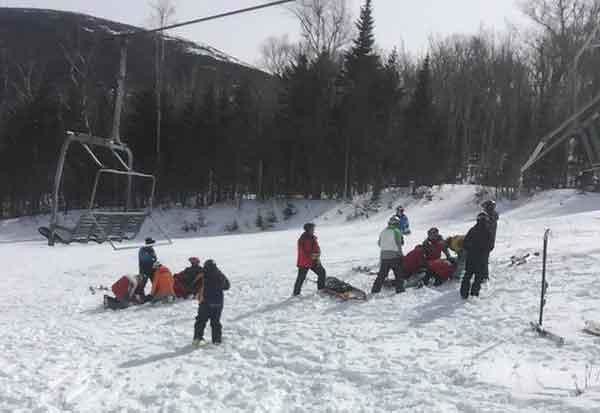 Seven skiers were injured Saturday when the King Pine lift at Maine’s Sugarloaf Mountain Resort experienced a rollback, prompting some to jump off the lift.

Four people were taken to a hospital from the resort, though none are believed to have life-threatening injuries, resort spokesman Ethan Austin said. A rollback refers to an incident in which the chairlift travels backwards. The rollback did not cause the lift to come off the cable. The lift rolled back a distance of 9 chairs.

A total of 204 people were evacuated from the lift. No guests were injured during the lift evacuation process.

The accident happened just days before the resort is to host the U.S. Alpine Championships starting Tuesday, with celebrity skiers like Lindsey Vonn and Mikaela Shiffrin set to compete there.

"So all the chairs ... they were slipping backward. And as gravity works they started to go faster and faster and people were jumping off at the lower levels," he said.

About 230 people were riding the King Pine quad lift at the time of the accident, officials said. Those still on board after the lift was stopped were evacuated, a process that took about two hours.