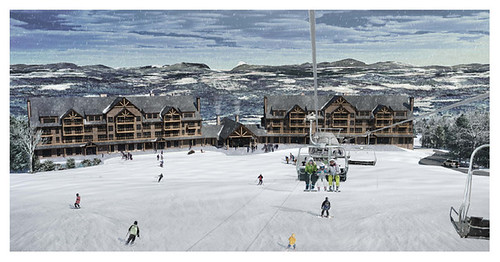 The Northeast Kingdom of Vermont’s Q Burke Resort held a groundbreaking ceremony last week to kick off the construction of a 180,000-square foot hotel at the base of the ski area.

Construction of the 116-suite Hotel Burke began with a groundbreaking ceremony on Tuesday, June 3, under the direction of PeakCM, which was responsible for building the Tram Haus Lodge, Hotel Jay, and Pumphouse Indoor Waterpark at Jay Peak. The resort plans to open the hotel December 2015. The ownership of Jay Peak acquired Burke Mountain in May 2012.

"The overall goal is to duplicate the success at Jay Peak but in a manner that sits well at Burke.  Right now Burke has between 65,000 and 80,000 skier visits a year, Jay Peak's JJ Toland told SnoCountry.com.

"That relatively low number is due mostly to the fact that the area has a very small bed base. It’s a fantastic mountain to ski, right off the highway from either Boston or Montreal. But those people that travel three hours need a place to stay at the end of the day. Our goal is to give them a place to spend the weekend, experience the amazing skiing at Burke, the wonderful community, and the many shops and breweries that have popped up in the area in the last few years."

The new hotel and conference center will offer rooms ranging from studios to 3-bedroom suites. Other amenities will include a new bar and restaurant, conference spaces and a fitness center. Outside of most rooms, a balcony will offer views of the slopes or Willoughby Gap.

"Burke has traditionally had a strong summer business, and now with a conference center, corporate meetings and events can round out a solid economic base.  All in all over 2,000 jobs are being created because of this project, and the impact is a significant shot in the arm," Tolland told us,

The $108 million hotel is part of a multiphase revitalization effort, that includes an aquatic and tennis center to follow. The tennis center will be a mix of indoor/outdoor courts available to locals, day visitors and overnight guests and the aquatics center will provide pool and lane space for hotel guests as well as area swim meets.

In regards to the local community’s views about the project, Tolland said, “Burke has seen a lot of ups and downs with the various owners in place over the last few years. There’s a ‘we’ll believe it when we see it’ sentiment.  Now that we have shovels in the ground and concrete pouring next week, there’s an increase in public confidence.

“Bill Stenger, (Jay Peak President and CEO) who has been leading this effort, has delivered on his promise at Jay with three hotels. Jay has seen over 220 percent increase in revenue since 2008 and we went from 221 employees to over 1,500 at Jay and the surrounding area with the increase in hotels, restaurants, and B&Bs. At Burke, the construction of the hotel brings the need of 50-80 long-term rentals, so the economic significance is immediate and impactful."

Tolland noted that construction of the hotel will be taking place over the winter, but it will not affect ski operations. The hotel will be built about half a football field below the mid-Burke lodge, and was designed to offer views of Willoughby gap without occluding skier views.

Andrew Baird, Q Burke’s Director of Marketing and Sales, wrote in his blog that, "this is just the beginning. Now that ground has been broken, Jerry Davis and his team from Peak CM will work to see this project through and deliver a stunning, 116-room, 180,000-square foot hotel and conference center for December of 2015. We'll continue to keep you updated on the progress and we cannot wait to see the finished product,”